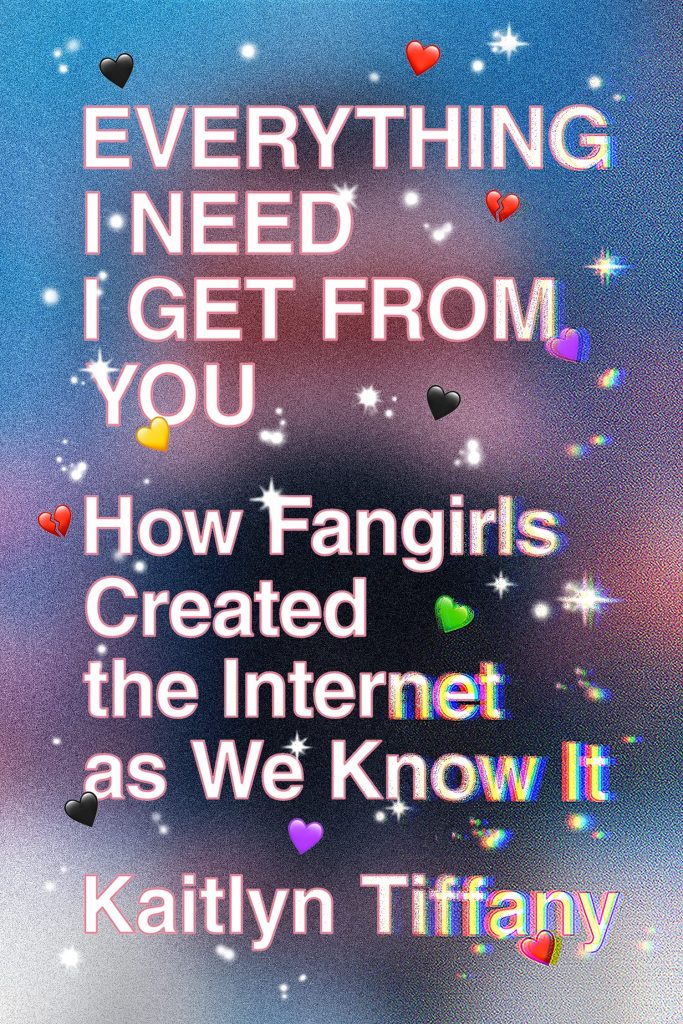 “Everything I Need I Get From You: How Fangirls Created the Internet as We Know It” is a smart, empathetic work of nonfiction that examines young women and the ways they have innovated digital spaces. With a focus on the One Direction fandom, of which she herself was a part, Atlantic writer Kaitlyn Tiffany upends our biases about fangirls and shows them as the creative, tongue-in-cheek, freethinking individuals that they are.

Although I normally refrain from mentioning such details, in this case, it seems apropos to mention that I am also a former fangirl. Although I preferred fictional universes to boy bands, my experiences with close-knit fan communities, outlandish inside jokes, and “ASDFGHJKL” moments were similar to what Tiffany describes. Tiffany’s book made me nostalgic for my teenage days browsing fanfiction.net, LiveJournal and Tumblr, when it seemed like the internet was created just for us. It is validating to see these fans get the critical examination that they deserve, especially from a writer who intimately understands them.

When it comes to her personal connection with fandom, Tiffany is honest and forthcoming. In the first chapter, she describes finding One Direction at the age of nineteen: “The year was a bad one for me in general, and I didn’t have any idea why I—the gleaming try-hard of suburbia!—was suddenly failing at essentially everything.” For her, the One Direction fandom connected her to others like her and gave her access to feelings that she could not express in her daily college life. Though “Everything I Need” is primarily a critical examination, Tiffany’s self-effacing tone and sly humor cast her as a worthy memoirist as well.

Indeed, much of the book’s strength comes from its personal accounts. Fangirls are often judged and misunderstood, and more often than not, their motivations are more complex than the media has given them credit for. Take Gabrielle Kopera, who achieved fifteen minutes of fame after creating a shrine that commemorated Harry Styles’ vomit. (Since I am not a One Direction fan, this supposedly famous moment was completely new to me.) Though depicted as a crazy, clueless fan by the media, Kopera was fully in on the joke—in fact, it was a joke that she herself was perpetuating. Kopera had grown up just five minutes away from the U.S. Route 101 site in Los Angeles where Styles was photographed vomiting, and she saw the photos as “a prank the universe had played on her alone.” At the time, the One Direction fandom had provided Kopera with respite from her boring life, but here Styles was, vomiting “right in the middle of the drudgery of her life.” While we may be scratching our heads, inside jokes such as these are fully understandable to those involved in the communities. In fact, this shared secret language is exactly what gives fangirls power.

To show that fangirls have invented the internet is a lofty task, especially for something as multifaceted as the internet. While she makes well-argued points about how women and minority groups have changed the interfaces and user experiences of today’s social media platforms, Tiffany’s experiences with the internet may not be yours. I found specific examples, such as the way Black Twitter innovated the platform, more persuasive in their own contexts than against the broader thesis. “Everything I Need” is the most compelling when it captures fangirls, both online and off.

“Everything I Need I Get From You: How Fangirls Created the Internet as We Know It”
By Kaitlyn Tiffany
MCD X FSG Originals, 320 pages, $18