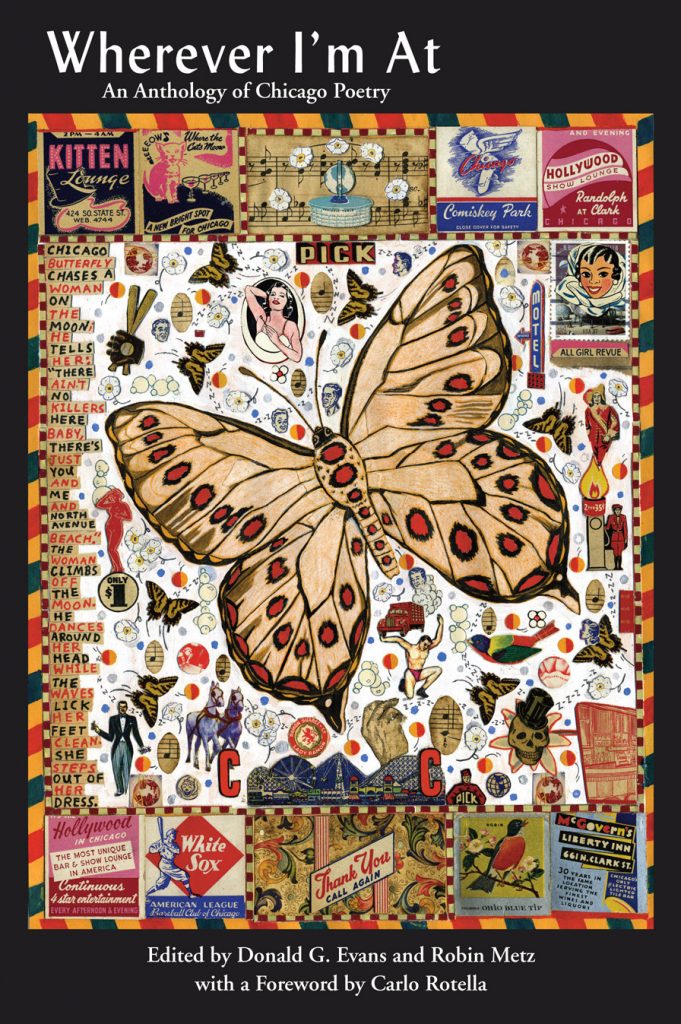 Here’s a new thing to do on a June evening. Grab a cup of tea or a shot of something and go out to the front stoop and open “Wherever I’m At: An Anthology of Chicago Poetry” at random.

You may find this opening to “My Chicago,” by Emily Thornton Calvo:

“Chicago is no woman.
He is the cousin who owes you money,
Pays you back with a wink and a smile.
You don’t ask where the money came from…”

Or this from “Steal Away” by Michael Ananea, which describes the Jeffery bus as a “cabinet of artificial light” and tells of “sodium lights yellowing toward evening.” The poem warns that “at some point in our lives/we might each of us be called/upon to be what we seem.”

Or this, from Edward Hirsch’s “I Missed the Demonstration”: “It’s hard to reconstruct/how history catches us/in its grip/or passes us by.”

The anthology is, in short, full of startling and various riches. With 134 poems from writers ranging from Ana Castillo to Stuart Dybek to Kathleen Rooney to Sandra Cisneros to Haki R. Madhubuti, plus more than two dozen images from artists including Frank Spidale, Tony Fitzpatrick and Kerry James Marshall, the book is about the different parts and feelings and experiences of Chicago. There’s a poem about a kid scaling a railroad bridge to show off; a Lawndale poem; a Planetarium poem; a Quincy El stop poem; a poem inspired by that strange “Body Worlds” exhibit at the Museum of Science and Industry; a poem about protesting police violence; and one at Ronny’s Steakhouse. There are poets with roots in South Korea, Bosnia, Mexico, Nigeria and the Philippines.

These are all modern poems—the rules for inclusion were that the poem had to be about Chicago, and the poet had to be living (at least, while the anthology was put together). No Carl Sandburg or Gwendolyn Brooks, though as editor Donald G. Evans notes in his introduction, Brooks appears to be a guiding light, in that many poets focus, as she did, on the particulars of streets and neighborhood. Nelson Algren with his smart-aleck cynicism mixed with wide-eyed wonder is another muse—Castillo dedicates her long masterpiece, “Chi-Town Born and Bred, Twentieth Century Girl Propelled with Flare into the Third Millennium (c.1999)” to “Nelson and Simone.” Together, these poems attempt to capture a city that cannot be captured, because it is made of too many parts and always changing, like the Lake, “slipping out of used waters for new,” as Algren wrote.

The late poet Robin Metz started the anthology way back in 2009, but at some point, “got stuck,” overwhelmed by other obligations and the project’s sheer scale, Evans recalls. Dying of pancreatic cancer, Metz asked Evans to take on the job, and Evans agreed. At first with Metz, and then with Metz’s ghost looking over his shoulder, Evans went through the long, hard process of sorting through hundreds of poems and authors—limiting the collection to one poem per writer, avoiding repetitions of subjects and themes.

The result, as Carlo Rotella writes in his introduction, is a book where a real Chicago can be found, “accruing in a slow steady tidal surge of recognition punctuated by lightning-strike flashes of revelation.” Perhaps a copy of this lovely book should be given to all new residents, along with their first red-light ticket, or water bill. Chicago is a riotous, rancorous circus parade—this anthology can help you jump on a float, or pick up a baton and march.

“Wherever I’m At: An Anthology of Chicago Poetry”
Edited by Donald G. Evans and Robin Metz
The Chicago Literary Hall of Fame in partnership with After Hours Press and Third World Press, 311 pages, $25