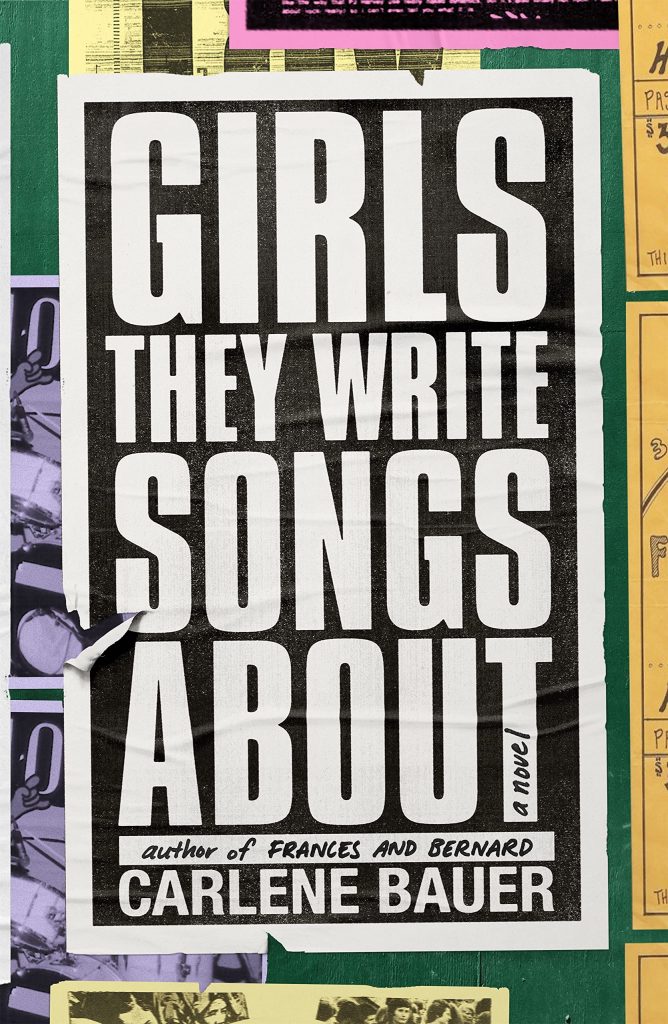 “Girls They Write Songs About,” Carlene Bauer’s new novel, declares itself with the opener: “Rose and I moved to New York to be motherless.” Both “true daughters of the second wave,” the bookish Charlotte and firecracker Rose came to New York City with desire and literary ambition and found kindred spirits in each other. But from that start we are also warned that they were “neither selfish nor selfless enough to become heroines” and from Charlotte’s present, they are no longer on speaking terms. We are at once informed of the novel’s central relationship and its coming doom.

But doom is to come over the course of decades. “Girls They Write Songs About” begins in a New York City magazine office circa 1997 and ends in a mid-2010s California wildfire season. Over time we see many iterations of this pair. Bauer shows them as young vibrant artists, cheating spouses in unhappy marriages and in “non-Youth.” Time flows in a way that contributes to how this is a capital-N novel. Characters introduced in the first hundred pages will disappear, and then return a hundred pages and a decade later. We’re introduced to the man Charlotte marries in one chapter, and by the next it’s years later, the marriage unraveling. The way it is written, you can see time rush past our narrator in the way she feels it rush past her.

What this rushing feeling ultimately provokes are crises based on the opening declarative statement and our central figures’ dedication to it. By the middle, Charlotte has two middling books to her name and has remained steadfast to the feminist principles that walked her into divorce, affairs with married men and love forsaken. Meanwhile, Rose has abandoned her creative dreams for a security and family that she betrays with infidelity. It’s this separation from their shared dream that breaks their friendship, but it’s Charlotte’s continued dedication to that dream despite her failures and her envy and resentment of Rose’s separate path that keeps the novel interesting after Rose’s exit.

“Girls They Write Songs About” continues for seventy pages after that exit and for another fifty after Charlotte departs a sterilized New York filled with “Mothers, hundreds of them, strollers everywhere.” But what fills Rose’s absence for that length, a section I refuse to spoil, makes clear that this novel wasn’t about a friendship, but about questions that the declarative opener posed: Is it worth sacrificing motherhood to pursue artistic and personal freedom, or do you have children who’ll know their lives were produced of your sacrificed desires? At what point do you succumb to the yardstick that society conditioned you to measure your life around? Can you trash that yardstick (a family) for those desires, even if the yardstick is someone else’s? What’s the cost of the non-traveled road? Or more simply, as Charlotte repeatedly asks to increasingly muddled answers, “What did we want?” The good novelist, Bauer doesn’t give neat answers, but the questions she’s asking, even as a declarative statement, are good questions. (Brendan Buck)

“Girls They Write Songs About”
By Carlene Bauer
Farrar, Straus and Giroux, 320 pages, $27