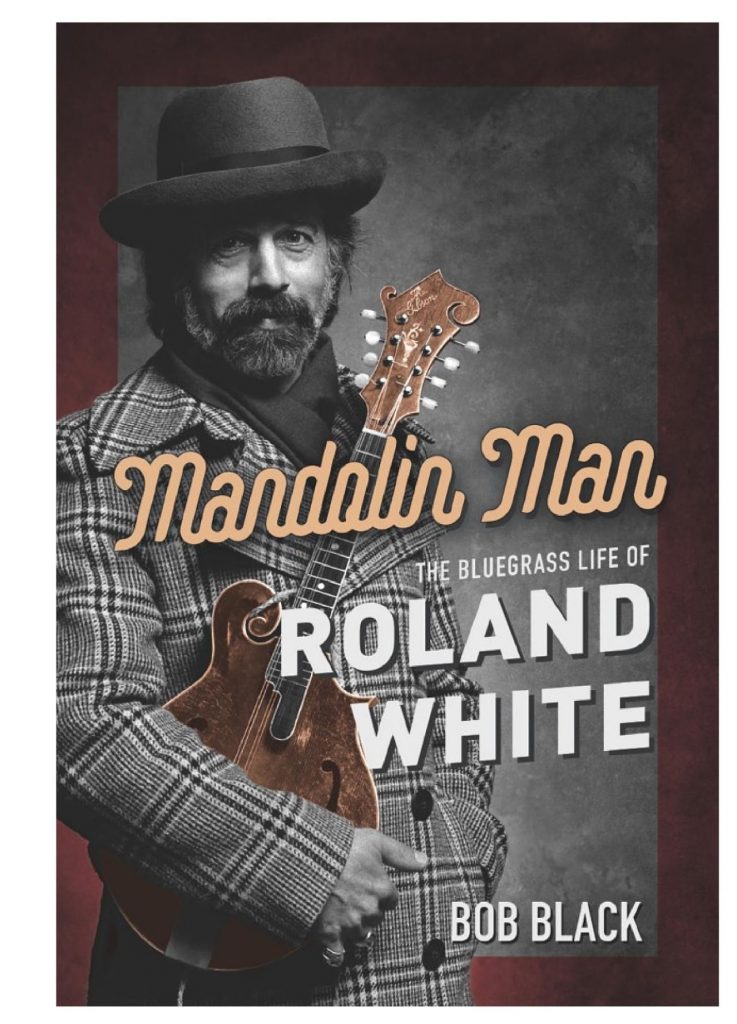 Two days before I received my advance copy of “Mandolin Man” from the University of Illinois Press, I opened the New York Times and read that Roland White, the subject of “Mandolin Man: The Bluegrass Life of Roland White,” had died. I can only hope that before his passing at the age of eighty-three, Mr. White had the pleasure of revisiting the details of his eventful life in bluegrass music. Written by banjoist Bob Black (that’s right, a book by Black on White), “Mandolin Man” is the kind of biography that unabashedly places its subject on a pedestal. Or in this case, a stage in a folk club, schoolhouse auditorium, Grange hall or repurposed pasture. If you are allergic to bluegrass, then “Mandolin Man” will only aggravate your condition. But if banjo rolls, G-runs, bass slaps, four-part harmonies, and the trill of mandolins set your soul to soaring, then, my friend, this book is for you.

Born in Maine and transplanted to Southern California at the age of sixteen, Roland White had a calling. With parental encouragement, he and his brothers Clarence (who would later join the Byrds) and Eric took up assorted stringed instruments, practiced like hell, and sooner than you can say “Cotton Eyed Joe” were performing in straw hats and bib overalls on the Los Angeles television program “County Barn Dance Jubilee.” Through additions and subtractions of band personnel, the Three Little Country Boys evolved into the influential 1960s folk revival bluegrass group the Kentucky Colonels. In 1964, the Colonels recorded the landmark album “Appalachian Swing!” and performed at the Newport Folk Festival. (The group was so well thought of that Jerry Garcia followed them on tour.) As the folk music boom subsided in the late sixties, the Kentucky Colonels broke up and Roland hired on with Bill Monroe as a member of the Blue Grass Boys. When life on the road with Monroe got a little lean, Roland opted for a steadier paycheck and joined Lester Flatt’s group, the Nashville Grass. In 1973, he reunited with his brothers to form the New Kentucky Colonels. Their revival was fruitful but short-lived. In July of that year, Clarence White was fatally struck by a car after a gig in Palmdale, California. Roland moved on. He spent the remainder of his career, with an occasional odd job thrown in, becoming a stalwart of the ever-evolving bluegrass scene with the groups Country Gazette, the Nashville Bluegrass Band, and, finally, the Roland White Band. He’s been inducted into the Bluegrass Hall of Fame (class of 2017), as have the Kentucky Colonels (2019). (Go to Owensboro, Kentucky, and see for yourself.)

In recounting the life that Roland dedicated to bluegrass, Black offers up a loose, easy narrative that unfolds like a pleasant ramble down a country lane, with plenty to draw our attention along the way. Names—of people, places, programs, events and things—crowd the landscape like rioting dandelions (there is a handy appendix to help you keep track), and there are asides aplenty. We learn, for example, how the Goo Goo Cluster candy bar got its name, that Bill Monroe’s brother Birch held his nickels tight, that Clarence White and Gene Parsons invented the B-bender, and who replaced whom in what band when. For some readers, Black’s good-natured tendency toward minutiae might slow things down. But I found it apropos of a book about a musical genre practically invented to stitch people together like an Appalachian quilt. Bluegrass is a musical genre, yes, but it is also a community, the beauty of which resides in the very details that Mr. Black, like any good storyteller, generously shares. Roland White picked his way through life with a singularity of purpose, not to mention a sense of timing and work ethic to match, that made him a colorful piece of the bluegrass community quilt. He was an accomplished, innovative musician, steady hand, and respected mentor. As the Kentucky Colonels sing on the record a “Long Journey Home,” “My life on Earth is but a span, and so I’ll do, the best I can.” Cue the eight-string tremolo.