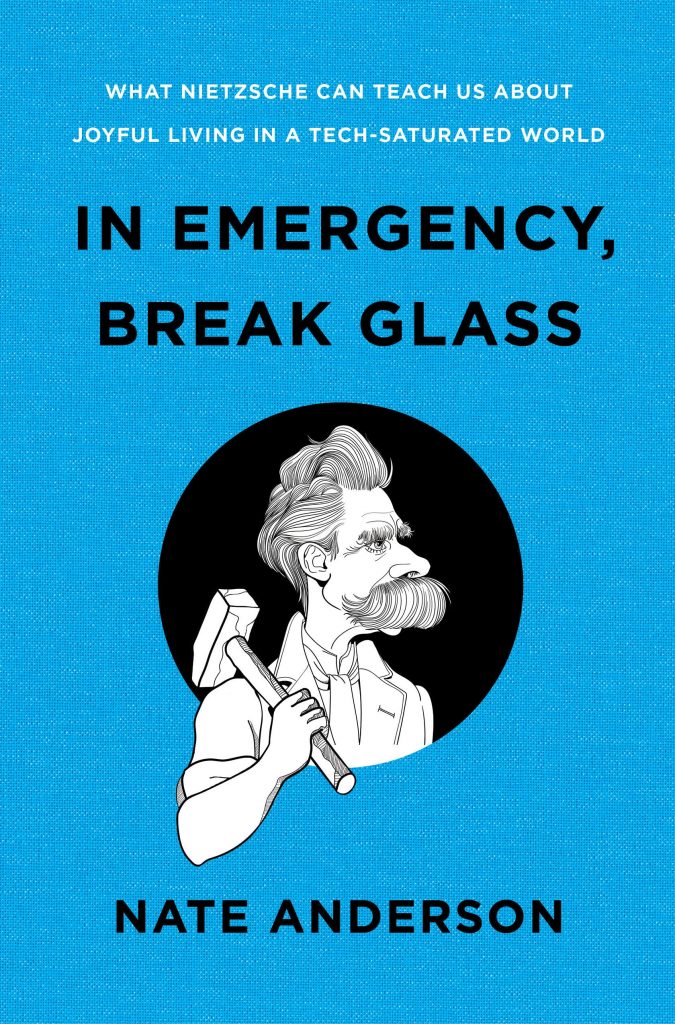 An acquaintance of mine, recently divorced and looking online for love, tells me that most dating service postings contain the phrase, “No drama.” It struck me as a sad little sentence. No drama? No surprises, no emotional exploration, no testing of commitment, no passion? What kind of romance is that? A very pragmatic, low-maintenance one, I suppose, one suited to an age of diminished expectations.

It’s an example of the unadventurous, overly controlled, frictionless approach to things that writer Nate Anderson describes and attempts to counter in his book-length essay, “In Emergency, Break Glass: What Nietzsche Can Teach Us About Joyful Living in a Tech-Saturated World.”

“Joyful living” isn’t the first association most of us have with Friedrich “God Is Dead” Nietzsche, the nineteenth-century philosopher who prophesied a coming race of godlike übermenschen, pursuing their will to power while gazing down on humanity from the rarefied heights. As Anderson recounts here, the actual Nietzsche led a tormented life of constant illness, sleeplessness, loneliness, rootlessness and neglect, ending in psychotic breakdown and ten final years of incurable madness. His own verdict on existence was, “To live is to suffer.” The philosopher felt a visceral contempt for what he, in “Thus Spake Zarathustra,” dubbed the “Last Men,” those folk concerned only with such unheroic goals as health, comfort and contentment, the very things that he himself lacked. As someone who knew him said, “Nietzsche hated the normal person because he could not be one.”

Deputy editor of the IT-oriented magazine Ars Technica, author Anderson begins by wondering if our electronic servants have become our masters, draining some subtle but vital quality from our experience of life. Have we, like the Last Men, been over-influenced by the “post-Industrial Revolution emphasis on safety, ease, control, leisure, abundance, [virtual] connection, and health?”

For both Nietzsche and Anderson, the answer is a resounding Yes. In an information economy, when everything can be had at the touch of a button, what gets lost is a sense of ourselves as something other than passive consumers. As the author puts it, “I had click-tapped my way into a lifestyle of comfort, abundance, and immobility—and found it intolerable… What has become of the wonder and danger of life?”

Feeling lost, Anderson claims to have found in Nietzsche the secret of living both joyfully and seriously, as though life mattered. He suggests that Western civilization’s crankiest, most grandiose and least politically correct thinker can help us deal with our contemporary world of chronic information overload, loss of connection to the body and the physical world, and a general weakening of purpose and will, as we become ever more dependent upon machines.

To guard against the dystopic tendencies of an electronically mediated existence, Anderson offers a series of commonsensical suggestions that would not seem out of place in Readers Digest or Oprah’s late O magazine: learn to sensibly manage the Internet’s torrent of spectacle and data, engage in regular physical activity, train yourself to read slowly and deeply, exercise your attention span, master a craft, control and limit your needs.

Good ideas all, which few would disagree with, but not exactly what Nietzsche would describe as truths that “cut into our flesh with knives.” It’s advice designed to help us cope with the all-consuming industry that Anderson himself is part of, without encouraging us to challenge that industry or to take a closer look at its nature and workings. Nietzsche referred to himself as human “dynamite,” but this eminently practical and sensible book is more of a sparkler, and the Nietzsche it offers us is far less caustically critical, reckless and alienated than the persona we encounter in his own work. What, one wonders, would Nietzsche say of this self-help guide, which turns his densely packed, often mind-blowing paradoxes and provocations into helpful, easily digestible bromides and bullet points?

I think he would find some of the unexamined assumptions on display here amusing, as when Anderson notes that in losing our attachment to community and cultural tradition and getting on the Internet bandwagon, “we have embraced a boundless freedom.” But we’ve also embraced boundless surveillance and micro-targeted marketing, as every click is turned into commoditized data, subtly altering the algorithms that constitute our mental environment. Access to the Internet’s ocean of addictive content, all of which is shaped by the same forces and shared on the same platforms, can be considered liberating only from a rather narrow point of view.

Like Nietzsche—who saw equality and fairness as synonyms for mediocrity, and hence had no interest in the communal and collective side of life—this book is resolutely apolitical, accepting the fully automated, robotic world that we inhabit as a given. What Anderson seeks to regain, within this deadening context, is the “eye of the tiger” he has gradually lost among the emails and click bait that clamor for his limited attention. By the time he has plowed through Nietzsche and adopted his hero’s lofty outlook, the author announces he is ready to… sell his house and move with his family “to pursue new dreams and new communities.” As do millions of Americans every year, generally without first seeking inspiration from the dark-tinged romanticism of “Zarathustra” or “The Will to Power.”

Is this earnest, hard-working family man, who takes such modest risks, really an eye-of-the-tiger sort? At a certain point I began to wonder if the true fear driving this book is being taken for—or actually becoming—a dreaded “normie,” the techie equivalent of a square, i.e., a non-creative consumer of mainstream, passé content in a field where innovation is worshipped and obsolescence comes quickly. This book presents itself as an attempt at a transformative life—philosophy for modern times, but I suspect it will be received the way pretty much everything is these days, as just another meme designed to make our universal geekiness seem cool.