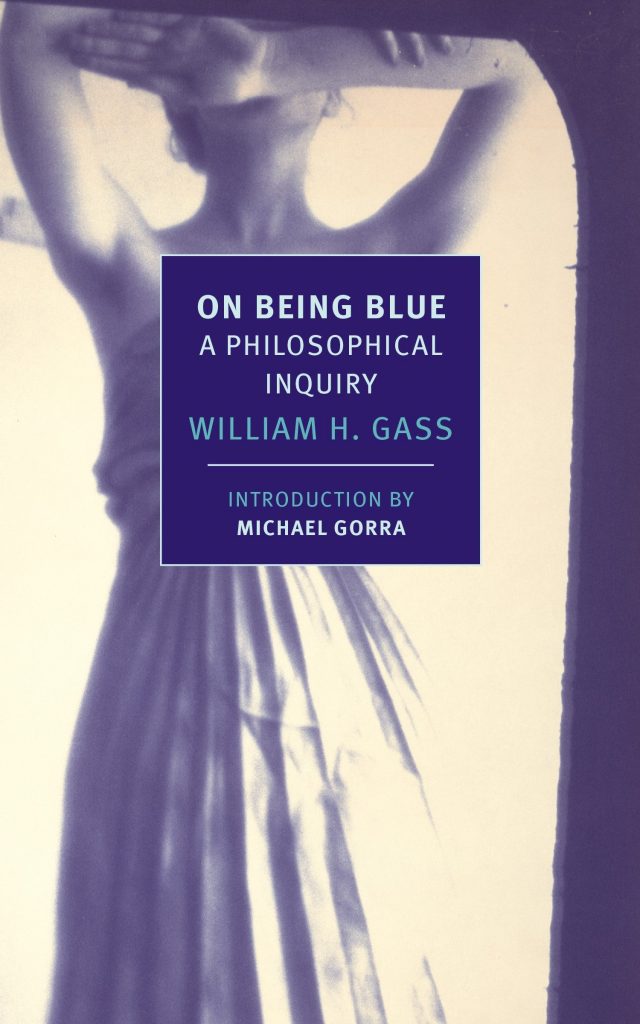 “Blue pencils, blue noses, blue movies, laws, blue legs and stockings, the language of birds, and bees, and flowers as sung by longshoremen.”

—”On Being Blue,” William Gass

I remember the first time I read those words. I was seventeen. Almost out of high school, but not quite. The book belonged to my father. He was fifty-one. He had almost completed his PhD. But not quite.

The lines were from an audacious little book by a professor in the department where my father was a graduate student. At Washington University. In St. Louis. The book was “On Being Blue.” The professor was William Gass.

My father had bought the book as a courtesy to Mr. Gass, someone he only knew to say hello to at school. He did not know Gass had any kind of reputation outside of the WashU philosophy department. He did not know that William Gass wrote book reviews for the New York Times, for example. Or that he associated with a then-current American literary movement, metafiction. He just knew William Gass as that scruffy-looking guy who taught philosophy but did things that seemed more like someone in the English Department would do.

In a way, it was weird that my father had bought the book at all. My father did not like to read. A second-rate education geared for the next generation of factory workers had guaranteed that. He read slowly, laboriously, and still moved his lips (which he was ashamed of). He was an idea guy, not a word guy. He excelled at logic and reason. Words were just a necessary evil to help get him where he wanted to go. I doubt if he ever read “On Being Blue.”

But I did. Guiltily, sneakily, covertly. I would creep into his office—a desk set up in one corner of my parent’s bedroom—and slip the tiny book out of its place between two larger books (let’s say between two large hardbound copies of the complete works of Plato and Aristotle). I did this quietly as a mouse. More quietly than a mouse. As quietly as Prometheus stealing fire from the gods. No. Even more quietly than that. As quietly as an introverted, guilt-ridden high school student slipping a copy of the Christmas edition of Playboy I, um, he had somehow managed to trick the guy at the newsstand into selling him—at sixteen.

The sentences in the book blew my adolescent mind. They were long, graceful, carefully polished sentences. Each word Gass used felt painstakingly chosen. Essential. Which they were.

“BLUE pencils, blue noses, blue movies, laws, blue legs and stockings, the language of birds, bees, and flowers as sung by longshoremen, that lead-like look the skin has when affected by cold, contusion, sickness, fear; the rotten rum or gin they call blue ruin and the blue devils of its delirium; Russian cats and oysters, a withheld or imprisoned breath, the blue they say that diamonds have, deep holes in the ocean and the blazers which English athletes earn that gentlemen may wear; afflictions of the spirit—dumps, mopes, Mondays—all that’s dismal—low-down gloomy music”

And on it goes. For eighty-eight pages!

Every sentence hums with unexpected phrases and hidden meaning: “blue pencils, blue noses, blue movies,” “the language of birds,” “longshoremen.” And then Gass got to the naughty bits. I knew there had to be naughty bits. It was 1976. The whole culture seemed to throb with the same hormonal delirium that shook my body. (This was the era of “Deep Throat” and “Behind the Green Door” and “Last Tango in Paris.”)

I didn’t say this earlier, but William Gass was known for a kind of mischief and sexual naughtiness. It was nothing overt. But there was something in his writing that seemed to hint that no matter what he was writing about he was really writing about sex.

Like in this passage about pronouncing the word blue: “SAY IT. Go ahead, stand before the mirror, look at your mouth, and say it. Blue. See how you pucker up, your lips opening with the consonants into a kiss, and then that final exhalation of vowels? Blue. The word looks like what it is, a syllable blown out into the air, and with the sound and the sight of saying it as one.”

I can’t read this without thinking of Lauren Bacall in “To Have and Have Not.” (“You know how to whistle, don’t you, Steve? You just put your lips together… and blow.”)

My mother did not approve of William Gass. She said she was not a prude. (She was.) And she loved to read. But there was something in his prose that set her off. She had read all of the short stories in the William Gass collection, “In the Heart of the Heart of the Country,” and she was not pleased. (I still own the copy of “In the Heart of the Heart of the Country” my mother read. She wore that book out reading it, and not approving.) She met Gass only once, that I know of, at a faculty party, and when she did she blurted out, “I am not impressed with your writing.” Later my mother was embarrassed, but my father thought it was hilarious, and repeated the story a lot.

I am sure the very qualities in Gass’ writing that offended my mother attracted me. I loved how Gass kept the reader in suspense for page after page after page. He indulged in a kind of intellectual edging, leading the reader on but never fully revealing his secrets—or his meaning. I mean, the book was called “On Being Blue” but what did that mean? Was it ultimately an essay on art? On depression? On writing? Was it about pornography? (He does mention blue movies. And later in the book he discusses sex scenes, and the naughty bits in highbrow literature.)

Gass’ writing was the very opposite of the proper five-paragraph style I was taught in high school. My teacher, paraphrasing President Truman, used to say “tell the reader what you are going to say, then say it, and then tell them what you just said.” Gass refuses to tell us what he is going to say. He just says it. Then he says something else. And then something else. All free associations on the word blue. Just one provocative thing after another. All wrapped in the language of Henry James or Nathaniel Hawthorne.

“Blue is the color of the mind in borrow of the body; it is the color consciousness becomes when caressed; it is the dark inside of sentences, sentences which follow their own turnings inward out of sight like the whorls of a shell, and which we follow warily, as Alice after that rabbit, nervous and white, till suddenly—there! climbing down clauses and passing through ‘and’ as it opens—there—there—we’re here!… in time for tea and tantrums.”

No wonder the book is still in print after all these years. And no wonder it still triggers others the way it triggered my mother. I recently ran across this posting on the pages devoted to “On Being Blue” on the Goodreads website: “This sort of filth has no place on a book review site which could be viewed by children. The explicit obscenities that bloat this seemingly innocuous pamphlet could have no purpose other than to corrode the virtue of readers by attempting to elevate their most base and craven lusts to the sphere of fine aesthetics.”

What I find amazing about this rant is not that the person who wrote this found parts of the essay obscene, or that the person thinks children might be skimming the Goodreads book reviews, but that the poster thinks the essay has only one purpose (to corrode virtue).

Rereading “On Being Blue” I find the most radical thing about Gass is not that he has a single, polemical point to make, but that he doesn’t. Gass seems to want to write about everything, everywhere, all at once. And then does his level best to do it in only eighty-eight pages.

I believe Michael Gorra when he writes in the introduction to NYRB Classics reprint of the book: “The real subject of ‘On Being Blue’ is language itself, which he sees as glorious to the exact degree that it is also inadequate, unable to sustain an immediate relation between a word on the one hand and its arbitrary and yet indissoluble referent on the other. All words are figurative; no blue is ever just blue.”

But, in true Gassian fashion, Gorra’s statement settles nothing. To study language the way Gass does is to slip into a blooming, buzzing multiverse, a bewildering multiplicity of shapes and things and ideas—“Blue pencils, blue noses, blue movies, laws, blue legs and stockings, the language of birds, and bees, and flowers as sung by longshoremen.”—and so on to the essay’s simple, enigmatic, almost spartan end: “This book was written for all those who live in the country of the blue and given in keeping to Mary. St. Louis, September 13, 1975.”