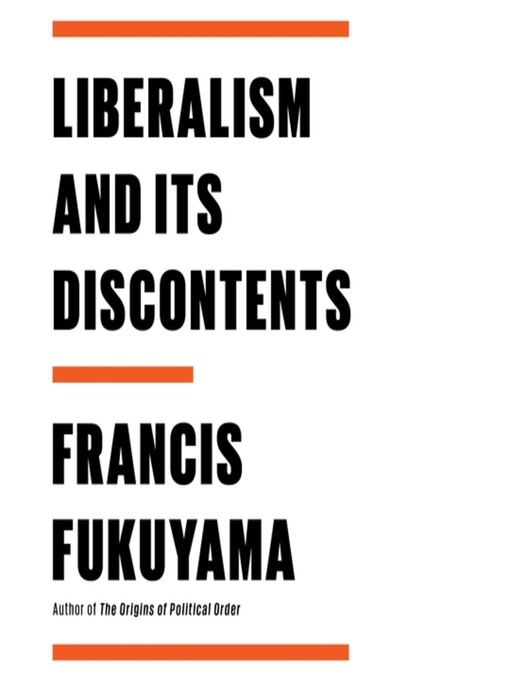 Professor Francis Fukuyama is a philosopher who teaches at Stanford University, most famous for his controversial book “The End of History and the Last Man” (1992). His newest, a spot-on analysis of the contemporary disorder, is “Liberalism and Its Discontents.” Fukuyama tethers his critique in a philosophical landscape. It isn’t enough for Fukuyama to identify and define the issues; his critique dives deep into definition; the philosophical nature of critiquing the issues; and then a call to action. The understanding is also the call to action. An Aristotelian call for moderation is the path. What all of this means is that he presents a larger picture than just “today.”

In this political philosophical treatise, Hobbes, Locke, Rousseau and little-known John Rawls lay out the lines of thought. These thinkers ask: How do we live in accordance with one another. Further, what is the just way to live with each other? Using these philosophers, Fukuyama offers a historical understanding of governing principles, in short, readable chapters built upon the idea of a liberal democracy. Not liberal in the sense of left democrats; the book isn’t political in that sense. No, the liberalism he defines is of a classical nature in which equality is the highest goal. Specifically, individual freedoms. How are those ideals governed? How have they changed? For the better or worse? ”At the heart of the liberal project is an assumption about human equality: that when you strip away the customs and accumulated cultural baggage that each one of us carries there is an underlying moral core that all human beings share and can recognize in one another. It is this mutual recognition that makes possible democratic deliberation and choice.”

Fukuyama defines liberalism. It is here that the evaluation may begin. (I think of Mick Jagger at Altamont asking, “Who is fighting and what for?”). With serious threats from right-wing populism and the progressive left of identity politics, liberalism and its sidecar democracy are in danger. Liberalism is a rule of law with the intent of protecting individual rights. Protecting individual rights means governing the protection of property. (This is a big point—the revolution toward equality stems in large part from the protection of property.) Likewise, it means equality is expressed in enterprise, and an idea based on universal, objective exchanges. This is not an expression of cultural relativism. Democracy allows for liberalism to be put into law. Fukuyama believes a liberal democracy is a good thing. However, “American institutions have decayed over time, becoming rigid and hard to reform, and are suffering from capture by the elites.”

From the beginning of the book, he defines “neoliberalism” (the Chicago School). The neoliberalist suggested a belief in man’s nature not to be run over by state intervention. The carrot has always been profit. The agency of profit allowed for property to be both desired and worked toward. The neoliberalist saw an overwhelming hand of government state welfare agency as preventing that right to property. Who is the state to intervene in man’s agency toward profit? The backlash to 1970s state programs came in the form of the likes of Ronald Reagan and Margaret Thatcher. Decrease government spending and open up global economics. And while Fukuyama thinks that this was a good thing, the shrinking wealth toward the middle and the disparity of the growing one-percent threw things off center. What was gross on one side became duplicitous on the other. While libertarians double-downed on personal responsibility, the shrinking middle class, the lack of a reasonable healthcare system and racism in the workplace trumped any progress. Personal responsibility is a hard road to travel under the weight of it all. The reactionary ideas of critical theory were created to combat this. Markets needed to be watched. Economics isn’t the only purpose of life. Humanity needs respect. Where do people struggling get respect?

Fukuyama argues that today’s critical theory decoded neoliberalism as nothing more than a defense of a power agenda for the white patriarchy of a plutocratic business world. The rise of Donald Trump in the United States gives evidence to this evaluation. It is here that Fukuyama offers that the defense of critical theory is also the degeneration of universal ideas. It isn’t that neoliberalism is wrong for the critical theorists, it is that everything is indefensible: Truth was being choked at the hands of deconstructionists like Jacques Derrida and power theorists like Michel Foucault. Their ideas were being used to promote critical theory. Who gets to decide if anything is right? “The search for human universals fundamental to liberalism was simply an exercise of power,” the critical theorists argued. Everything has become personal, lived experience and emotional appeal: the me-me times. That everything should be understood in power dynamics is equally obfuscating as the idea that everything should be seen in tribal cliques. The critical theorist moved from a Marxist critique of class to groupthink on identity politics. The arguments of people of color became larger than the shared issues of class. Is a white woman working three jobs to support her children and pay the rent considered privileged? Fukuyama rejects this and offers, “Recovering a sense of moderation, both individual and communal, is therefore the key to the revival—indeed, to the survival—of liberalism itself.”

“Liberalism and Its Discontents” is a short, layperson’s guide into contemporary political philosophy. It fits nicely next to George Packer’s more humane “Last Best Hope” and Thomas Piketty’s short “A Brief History of Equality.”

“Liberalism and Its Discontents”
By Francis Fukuyama
Farrar, Straus and Giroux, 192 pages