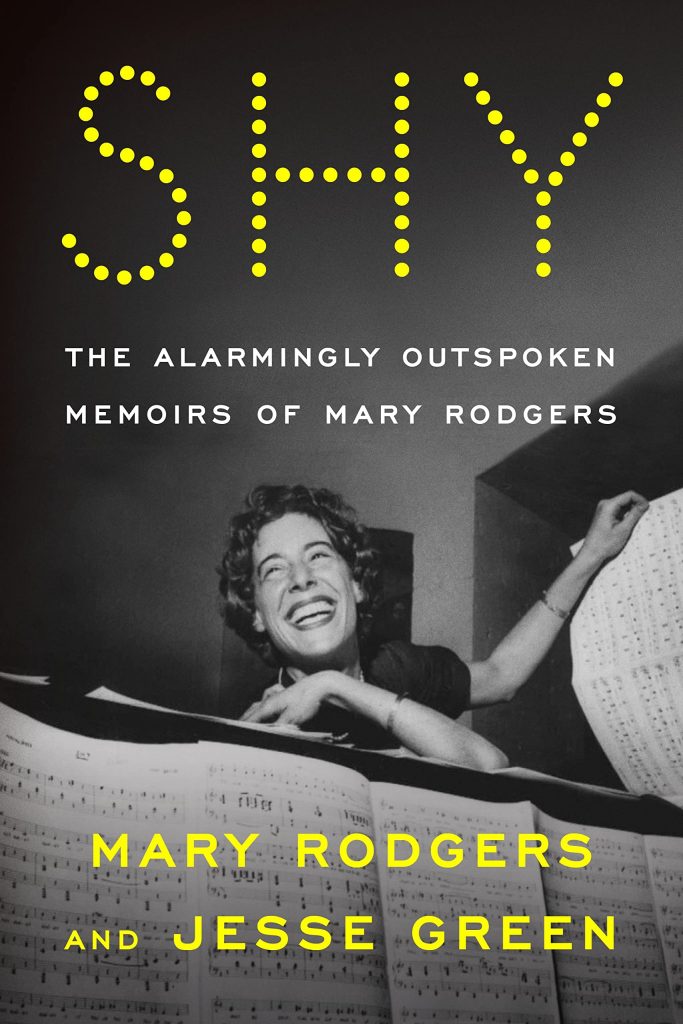 When considering “Shy: The Alarmingly Outspoken Memoirs of Mary Rodgers,” two d-words come to mind. The first is delightful, and the other is delicious.

The late Mary Rodgers was best known for composing “Once Upon a Mattress,” one of the most frequently produced school and community theater productions (I played Lady Mabel in community theater). Her young adult novel “Freaky Friday” has served as the basis for five Disney adaptations, including the 2003 feature film with Jamie Lee Curtis and Lindsay Lohan. Those unfamiliar with either work probably know her father, Richard Rodgers, who innovated Broadway along with songwriting partners Oscar Hammerstein and Lorenz Hart.

Rodgers immediately establishes herself as a wry and humorous narrator, who is more than happy to describe her own faults. Of her father, she mentions that “in specific he didn’t play Gershwin, the only composer he might have envied—well, maybe not the brain tumor part. Or maybe even that.” She cheerfully describes herself as being sandwiched between two more talented composers: her father, of course, and son Adam Guettel, who won a Tony Award for his 2005 Broadway musical “The Light in the Piazza.” One can easily imagine her sitting in her apartment and dictating her words to New York Times chief theater critic Jesse Green, who supplements Rodgers’ words with hilarious and informative annotations.

Blessedly, Rodgers and Green know exactly who their audience is. As Green notes a few pages in, “If you don’t know who Stephen Sondheim was, you’re probably not reading this.” The result is a cozy reading experience that feels like a step back to the Golden Age of Broadway. It’s also a wonderful source of Broadway gossip. Although not all the information will be new to Broadway devotees—Rodgers’ infatuation with Sondheim was never a great secret—she packs her memoir with exciting stories and details. “Steve” appears as one of the main characters, and for theater devotees mourning Sondheim, “Shy” is a great companion to other books about the legendary composer.

“Shy” is also a long-overdue contribution to the Broadway memoir canon. Though Rodgers might not have considered herself progressive in the day—to her chagrin, the three-and-a-half years between her marriages felt like the longest of her life—her memoir is an illuminating look at Golden Age Broadway from a woman’s perspective. To date, only eight women have won a Tony Award for Best Score, and Rodgers is honest about her experiences as a woman musical theater composer and divorced single mother. And though Rodgers experienced her fair share of privilege, her life wasn’t always filled with bright lights, either. There were also difficult parents, an abusive ex-husband, the death of a child, and antisemitism.

Befitting of the great Mary Rodgers, it only seems respectful to let her close in her own words: “So if I sound like a poor little rich girl, whining about disapproving parents and being a woman in a man’s field and the burdens of tending a creative soul—but I don’t believe in a soul—substitute any particulars you like. Jane Austen wasn’t an Upper East Side Jew, but I trust she would understand.”