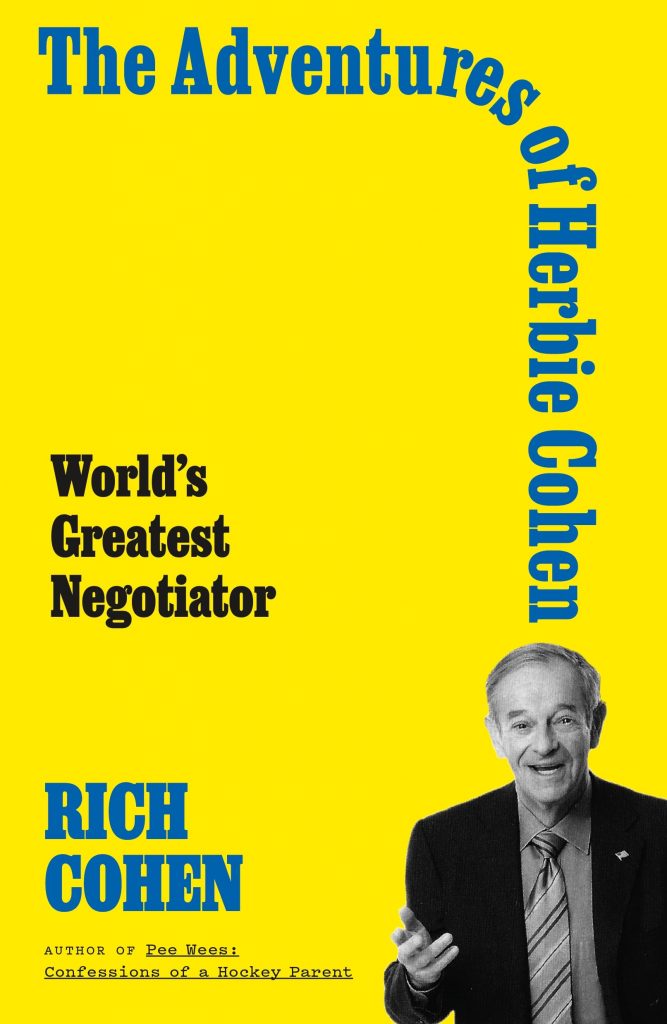 Rich Cohen is a Chicago guy. Born and raised on the North Side of Chicago, he is a prolific writer of journalism, nonfiction and fiction tomes, as well as movies. Among his large library are books on the Cubs, the Bears, the Rolling Stones, being Jewish and, in his best work, the ins-and-outs of Pee Wee hockey. Diving into his works, it is fair to say that family comes to the forefront in many ways. So, a Chicago North Side Jewish guy who loves sports, music and family hits on all chords when he writes this tactile and illuminatingly fun text on his father Herb. Herb casts a big shadow. It is fair to say most mature Chicagoans would recognize a Herb from these pages.

Herb Cohen was a best-selling author and businessman who was all about negotiations: Herb’s rules on life, and his son’s understanding of them as it relates to him, his own family, and the world at large are the centerpiece. As a Maxwell Street philosopher, Herb’s book “You Can Negotiate Anything” is more than an infomercial on sales. He turned a phrase, Ferris Bueller’d his way into restaurants (he is his own “sausage king of Chicago”), and peddled his isms that every day is its own opportunity. (He was even an adviser in arms negotiations.) A man who traveled the world lecturing to Fortune 500 companies on how to persuade. He was an Aristotelean salesman: “He’s a speaker, a guru of the corporate retreat, a consultant to governments and companies, the gun hired to work out the terms and close the deal, the wise man helicoptered in to settle the strike. He helped resolve the Major League Baseball umpires’ strike in 1979, as well as the New Orleans police strike the same year. He advised Jimmy Carter during the Iran hostage crisis in 1980 and 1981. He advised Ronald Reagan during the summits with Mikhail Gorbachev in 1985 and 1986.”

Born to humble means in 1931 Brooklyn, Herb grew up with a cast of characters. Personalities bigger-than-life. He entered the military to get out of physical combat and coached basketball. He went to law school at night, married his love and moved to become a Sears trainer in Chicago. A lecturer, a raconteur, Cohen writes about Herb’s zest for life that made an impact, a cigar in his mouth and eagle eyes on a deal. Where is the con, who is delivering it, and what does it mean for you? It would not be out of place to say in another life Herb Cohen could have come up with the majesty of the ninety-nine-cent price tag.

Writes Cohen fils: “He preaches engaged detachment, characterized as ‘caring, but not that much.’ More than a business strategy, he considers this a way of life. ‘Don’t get fixated on a particular outcome,’ he says. ‘Always be willing to walk away—from the car, from the house, from the property. Once you see your life as a game, and the things you strive for as no more than pieces in that game, you’ll become a much more effective player.’”

Rich Cohen was not able to walk away though—not from his father. He pays homage to his father and a way of life seemingly long gone. Maybe knowing Herb in his prime would have helped the current population understand and come to terms with the latest lines peddled to the masses. Rich Cohen has written a fun, engaging book that shows a deep love and understanding for the patriarch of the Cohens.