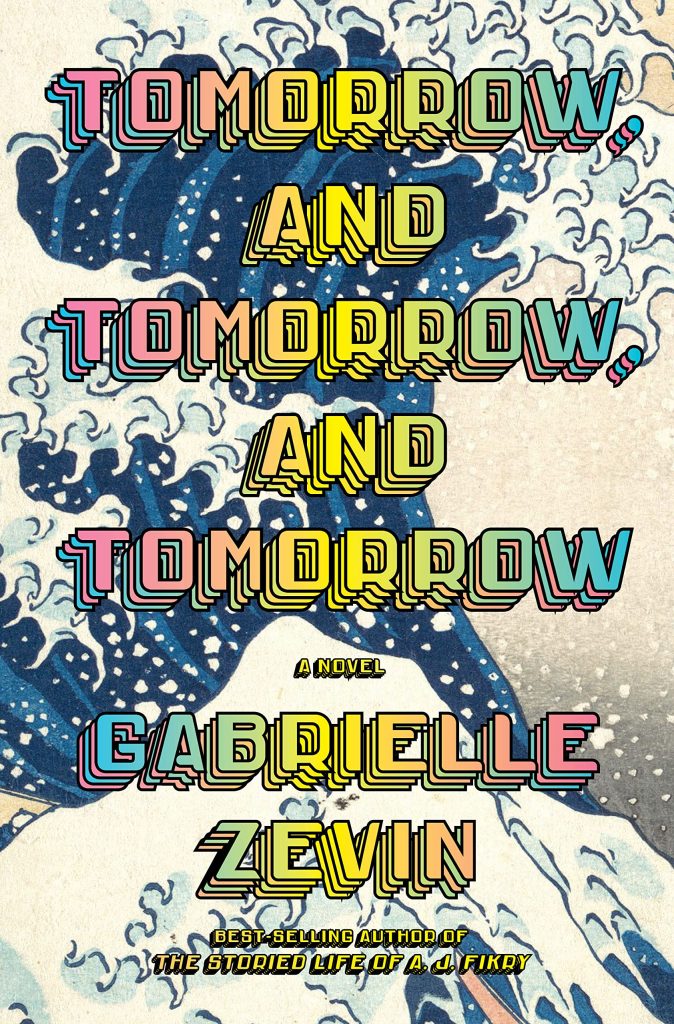 While reading “Tomorrow, and Tomorrow, and Tomorrow,” I made an important observation about my own writing preferences. Sometimes I am drawn to the language-driven and experimental. But when I come across a well-written, more conventional novel with rich characters and provocative themes—especially a delightfully long, four-hundred-page novel, such as this one—it satisfies a special itch. Before I know it, I find myself traveling back in time. I’m twelve-years-old again, and I’m just discovering the pleasures of adult fiction. It’s fitting that the subject of Gabrielle Zevin’s novel is video games, a form of play in which adults can take part.

Told from the point-of-view of an omniscient narrator, “Tomorrow, and Tomorrow, and Tomorrow” is Zevin’s successor to “Young Jane Young” and also “The Storied Life of A. J. Fikry,” which has been produced as a film that will be released this fall. Over the course of thirty years, Zevin explores the unconventional friendship and partnership of Sam Masur and Sadie Green. At eleven, they become acquainted at a Los Angeles hospital. Sadie’s older sister, Alice, is being treated for leukemia, and Sam is recovering after a horrible car accident that took the life of his mother and left his foot broken in twenty-seven places. Although the two have lived completely different lives—Sadie, who is Jewish, is from Beverly Hills, while Sam, who barely knows his Jewish father, lives with his Korean immigrant grandparents in Koreatown—they quickly bond over their love of video games. After a period of not speaking, they run into each other as Boston college students in the mid-1990s. This leads to their work on “Ichigo,” a video game that will transform their lives and the trajectory of their careers.

Non-gamer readers need not worry. Zevin writes about video games with a focus on their artistry, and learning about games is one of the novel’s pleasures. Zevin puts to rest any preconceived notions that games cannot be smart or political. In an MIT class, Sadie develops a Tetris-like game called “Solution,” which tricks players into assembling widgets for a Nazi factory. Later, Sam and Sadie’s first professional game, “Ichigo: A Child of the Sea,” is inspired by Hokusai’s woodblock print, “The Great Wave Off Kanagawa.” The game involves a small Japanese child who is lost at sea, and players are tasked with bringing the character home through a series of levels. Ichigo grows older over each, and when they finally return home seven years later, Ichigo’s parents no longer recognize them. At least originally, Sam and Sadie envision Ichigo as having an indeterminate gender, though Sam eventually convinces Sadie that a game with a male protagonist will better sell.

Of course, the fact that Sam and Sadie aren’t Japanese has modern-day implications. Yes, they’re partially inspired by the Japanese father of Marx, their friend and investor, but Zevin’s narrator does not let them off the hook: “It was 1996, and the word ‘appropriation’ never occurred to either of them. They were drawn to these [Japanese] references because they loved them, and they found them inspiring. They weren’t trying to steal from another culture, though that is probably what they did.” She deftly jumps to a 2017 interview with Kotaku, where a journalist asks Sam about cultural appropriation. Zevin’s omniscient narrator often flips to the future or hints at what is to come, and this does not merely offer foreshadowing. It also allows Zevin to reflect on the many ways in which culture has changed over her thirty-year period. In interviews, she has spoken of her interest in writing a coming-of-age story “about people who [come] of age alongside an industry,” and she mirrors the cultural zeitgeist with where Sam and Sadie are in their respective lives. It’s a smart choice and one that feels emotionally resonant, even for readers too young for most of the references. (That is something I can attest to.)

Both Sadie and Sam are flawed characters, often unwilling to see each other’s respective points-of-view. Upon “Ichigo”’s release, the more talented Sadie finds herself in the shadows of Sam, whose personal story captivates the media. Though Sam cannot relate to being a woman in a male-dominated world, Sadie is equally oblivious to the ways in which Sam’s socioeconomic status and disability have driven him toward making games that will sell commercially. Sam, who has dealt with his fair share of trauma, is arguably the more frustrating of the two, but Zevin extends empathy for both characters’ situations and never depicts one as being in the right. The result is a thought-provoking book that invites readers to involve themselves in it and never comes across as didactic or preachy. Zevin’s subject may be video games, but she reminds us why all art is essential to life.