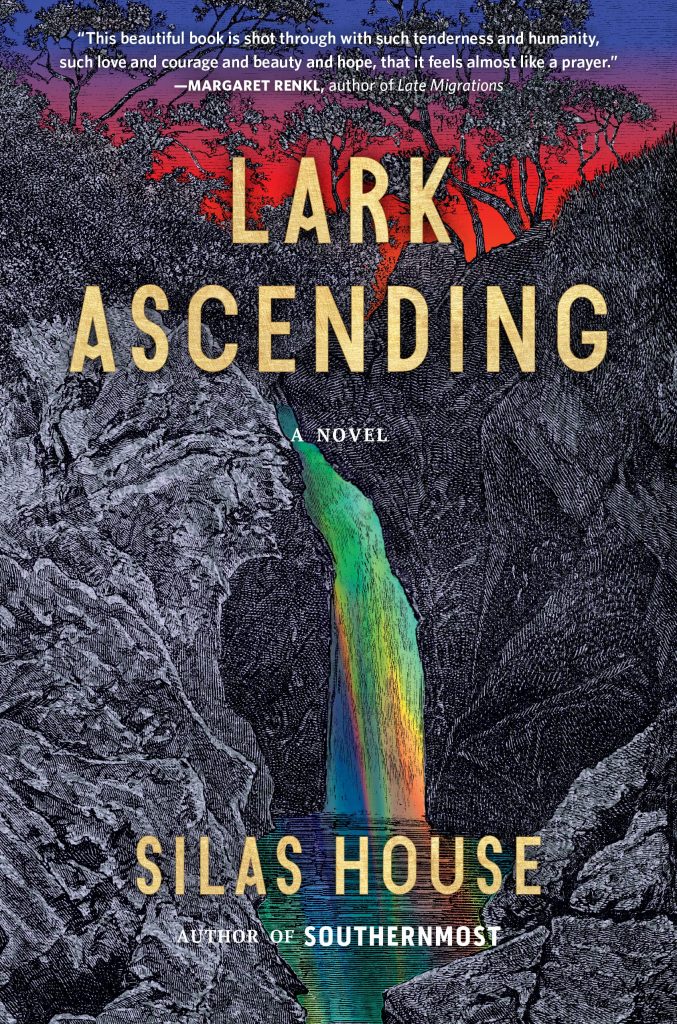 You’ll never look at a can of sardines the same way again once “Lark Ascending,” Silas House’s seventh novel, has its way with you. Actually, you won’t look at the comforts of home or your family or your pets or our contemporary world the same way, either. And I mean this as the highest compliment I can bestow on a story.

Set in an unsettling and eerily prescient vision of the near future, “Lark Ascending” is narrated by Lark, a gay man who came of age during the Hard Times. Wildfires have consumed much of the United States, and the destruction of crops and communities ushered the Fundies into power; the group wastes no time stripping the American public of their human rights and dignity. Lark is just a boy when these changes begin, so he won’t remember much of the Before—though he remembers his two aunts being taken away “because they loved each other”—victims of the Slaughters that also claimed “priests and professors and artists.” To escape this madness, young Lark travels from Maryland to Maine with his mother, father, his mother’s best friend Phoebe, and her two children, Sera and Arlo, where the group live for several years in relative peace and security.

But nothing in the world that House has so convincingly built in “Lark Ascending” lasts forever, and eventually, the fires encroach upon the Maine idyll and force the group to again seek shelter. By this time, Lark, Sera, and Arlo are fresh into adulthood, and Lark and Arlo have fallen in love. The journey doesn’t go smoothly, and by the time they reach their destination in Nova Scotia—to catch a boat to Ireland, one of the last countries accepting American refugees—the group has been reduced to Lark, his mother, and his badly injured father. By the time Lark reaches Ireland’s shores, he’s alone. There are many low points in Lark’s young life, and this is one of them: “to be alone like that is a grief all its own.” But he isn’t alone for long before a beagle named Seamus—a survivor thanks to his previous owner’s devotion—finds him, and the duo, seeking a place called Glendalough, stumble upon Helen, an older woman with a dark past. But it is Helen’s knowledge and guidance that changes the course of Lark and Seamus’ lives, and their company that changes hers.

“Lark Ascending” is told from an older Lark’s perspective, which lends the novel a classical storytelling sensibility. Lark’s voice and wisdom create the intimacy of being seated around a fire, listening to an ancient tale of survival, a propulsive journey into the heart of what it means to be human, to love, to lose, to grieve, to go on. The stakes here are nothing less than life or death, and though the narrative is often gutting, Lark never loses sight of the beauty of the world: “A gray blue like a storm cloud full of unspent lightning and unfallen rain… There was some comfort in knowing that, although the world was being torn in two, there were still remarkable things that went on being, that refused to lose their shine.” His story is an ode to survival, and to the many lives one lives over the course of a lifetime.

If you’re a crier (and maybe even if you’re not), you’ll want a handkerchief nearby as you read “Lark Ascending.” This is not a hopeful book, nor one with an easy ending, but there is solace in it—solace found, as Lark does again and again, in those we love.

Sara Rauch is the author of “What Shines from It: Stories” and the autobiographical essay “XO.” Her author profiles and book reviews have appeared in The Rumpus, Lambda Literary, Los Angeles Review of Books, Curve Magazine, and more. She lives with her family in Massachusetts. www.sararauch.com