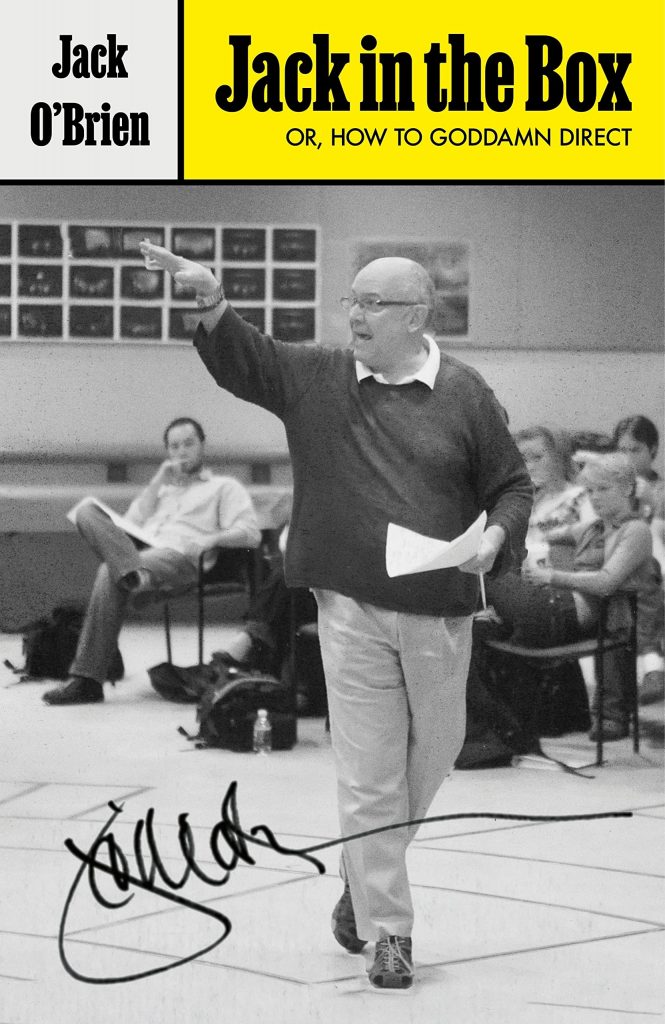 In his follow-up to his 2013 memoir “Jack Be Nimble,” renowned theater director Jack O’Brien, who served as the Old Globe Theatre’s artistic director from 1982 to 2007 and directed many Broadway productions, attempts to dissect his experiences. The book is entitled “Jack in the Box: Or, How to Goddamn Direct,” but as we quickly learn, describing the art of directing is practically an art in and of itself. It’s a practical profession learned on the job, and each production is its own unique experience, due to both the nature of the work and the sometimes-difficult personalities involved. Readers looking for a textbook approach to directing may prefer to seek it elsewhere. Still, as O’Brien himself acknowledges, textbooks also have their limitations. In his introduction, O’Brien expresses his hope that readers “might put this book down finally with a more nuanced understanding of the craziness that is a director’s life than we might have found in our beloved, well-thumbed, if probably inadequately revealing textbooks.”

In the early chapters, O’Brien attempts to educate lay readers with sections on terms such as blocking, casting and table reads. Still, these sections are less engrossing than the stories he tells of specific productions, and it is only after O’Brien has sufficiently laid down the groundwork that “Jack in the Box” gets going. O’Brien has worked with theater legends including Tom Stoppard, Stephen Sondheim, Neil Simon, George Abbott and Andrew Lloyd Webber. Particular highlights include his adventures directing the 1994 revival of “Damn Yankees” and “Love Never Dies,” 2010’s ill-advised sequel to “Phantom of the Opera.” “Jack in the Box” requires a degree of insiders’ knowledge, and it is best enjoyed by readers who are already familiar with theater’s big names.

O’Brien synthesizes what he learned when he can, but not all his productions came with easy lessons. Take for instance the “Damn Yankees” revival. When it came to updating the outdated elements of the show, O’Brien found himself butting heads with book writer George Abbott. Of Abbott, O’Brien writes, “When we first met he was 105 years old, and he died two years later at 107, and I truly believe those extra two years were pretty much fueled by fury at me.” At one point, Abbott told him, “If you don’t believe in the material, you can’t direct it.” On the surface, this seems like the kind of sensible, easy-to-apply advice that aspiring directors reading this book may be looking for. But when the audience ends up loving O’Brien’s revisions, Abbott is forced to concede to him. In theater, it seems, lessons can’t always be reduced to pithy sayings. O’Brien also fails to answer the question most on aspiring theater director’s minds—just how to get a job at a lucrative place such as the Old Globe in the first place—though more of O’Brien’s backstory is presumably discussed in his earlier memoir.

O’Brien has an affable, wry tone, and it is easy to appreciate him as a narrator. Hal Prince became enamored of O’Brien’s email style, and we can quickly surmise why. As he writes of the “Phantom” sequel, “I haven’t wanted to complain, or cavil, or show my hand, or, honestly, to betray RUG and Andrew, at this point, but this is what I sent [Prince] just a day ago: ‘Okay. What if I just kill him? Would anyone suspect it was me?’ Made me laugh. Him, too, I bet!” At least based on his own accounts, O’Brien comes across as a humble director, who genuinely appreciates his actors and is domineering only on rare occasions.

If not all his statements hold up as P.C. today—he was born in 1939, after all—that seems to be something O’Brien would also agree with. He may have primarily directed during an age when only certain people were afforded opportunities, but he also isn’t under any illusions about the good old days. Time marches on, as it should, but O’Brien represents the best of theater’s past.

“Jack in the Box: Or, How to Goddamn Direct”
By Jack O’Brien
Farrar, Straus and Giroux, 272 pages