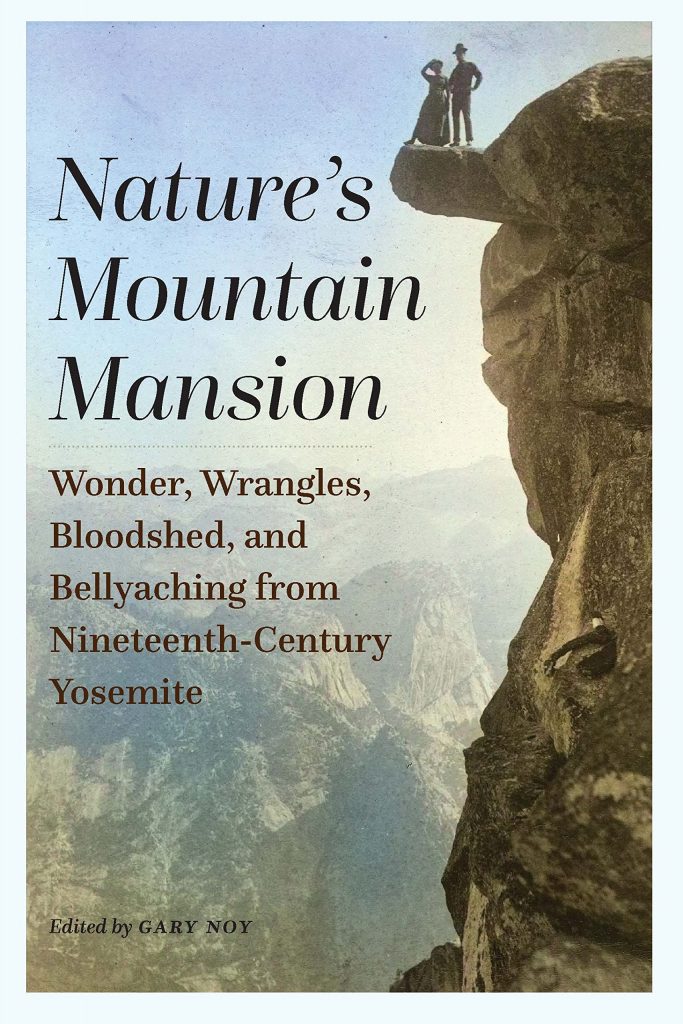 There is a photograph included in “Nature’s Mountain Mansion: Wonder, Wrangles, Bloodshed, and Bellyaching from Nineteenth-Century Yosemite” that shows two behatted men in a turn-of-the-century motor carriage parked by Yosemite’s Mirror Lake. The year is 1900, and theirs is the first motor car to enter the Yosemite Valley. A lot of automobiles have since made that journey, carrying millions of tourists who admire the scenery, buy T-shirts and hats, litter and ignore signs like DANGER | DANGEROUS CURRENT | DO NOT SWIM | THIS MEANS YOU | DEATH A DISTINCT POSSIBILITY in the water above Vernal Fall. Well, what is a national park, after all, without people to ignore the signage.

“Nature’s Mountain Mansion” is a book about the area we now call Yosemite National Park as seen through the eyes of the nineteenth century. But it is also a book about the human urge to seek out and somehow consume the beauty of the natural world even if it means trampling the flowers and polluting the skies. If Yellowstone is known for its fauna (bears, bison, wolves, elk) that roam a landscape stretched thinly over a bubbling, boiling cauldron, then Yosemite is prized for its flora, which is to say, its picture-perfect scenery framed by cool granite, flashy waterfalls and laidback meadows. Yosemite is quintessentially Californian, and not so very long after the first Europeans permanently invaded the territory, it came to represent a romanticized ideal of the unspoiled, sublime wilderness that one could find out west. Magazine and newspaper reports of Yosemite’s beauty that were published in the east helped spark the nineteenth-century version of California dreaming. There were, of course, indigenous peoples living in the Yosemite Valley long before the first exhausted tourists arrived on horseback. But once the Awahnichi were killed or scattered during the brief but brutal Mariposa Indian War of 1850-1851, Yosemite attracted a host of visitors armed with pen and paper and eager to scale the dizzying heights of elevated prose. Exactly how many ways can the sunrise as viewed from Glacier Point be described? Lots.

Or at least that’s the impression I got as I worked my way through the many first-person descriptions of Yosemite. Gary Noy, the assembler of this rich collection of primary-source documents (not all of which were written in the nineteenth century), teaches history at Sierra Community College.  I suppose Noy could simply have written a book on the history of Yosemite National Park, but the volume he has put together is far more compelling. “Nature’s Mountain Mansion” is a book for folks who like “I witness” history. Collectively, the letters, newspaper accounts, photographs, journal entries, reports and reminiscences describe Yosemite when it was still difficult to get to and unencumbered by the masses that have since bedeviled its existence. Is a picture worth a thousand words? Read “Nature’s Mountain Mansion” and decide for yourself. We get military accounts of the Mariposa Indian War, complaints about lodging, scientific speculations on the area’s geology, and page upon page upon page of various attempts to lasso Yosemite with linguistic lariats. More than a few of these lassos belong to John Muir, Yosemite’s most impassioned nineteenth-century advocate. His writings helped promote the conservation of the Yosemite area and bring it into national consciousness.

In the end, “Nature’s Mountain Mansion” left me with something of a Yosemite hangover; the book definitely will sate one’s thirst for descriptive writing.  But it also left me marveling at how desperately humans strive to possess—if only through the right turn of phrase or metaphor—that which resists all possession. Picked at and fawned over, harassed and hustled, damned and deified, Yosemite, like all of the natural world, impassively endures its trespasses without ever fully giving in. If I were in the business of anthropomorphizing Mother Nature, I’d wonder why she doesn’t simply shrug her shoulders and send all of us bothersome Lilliputians flying into the atmosphere.