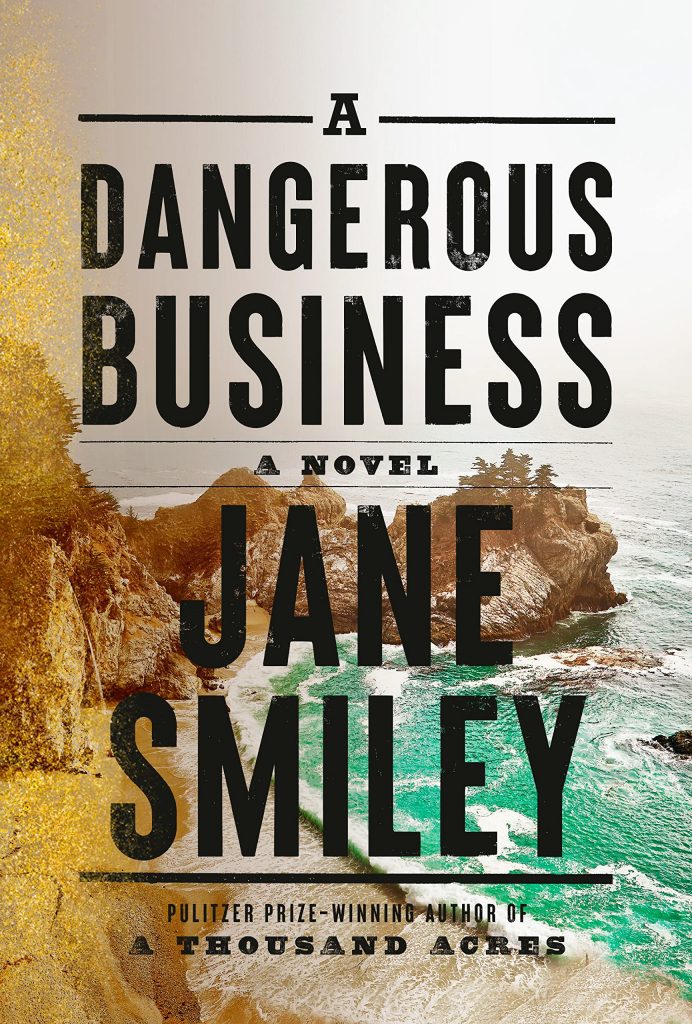 A reader could be forgiven for assuming the perilous business referred to in “A Dangerous Business” is the profession of the main character, Eliza, who takes up employment at a brothel in Monterey after her husband dies. But she finds her work pleasant compared to her marriage, and enjoys the steady income. It’s being a woman, generally, that’s dangerous.

Jane Smiley amicably and efficiently introduces Eliza in a matter of pages, from how she arrived in post-gold-rush California via the Midwest with a charlatan of a husband who quickly dies, to her present profession. Eliza is a reader, quite taken with “Mr. Poe,” and when several “girls” from local establishments such as her own go missing and are found murdered, Eliza follows in the model of Edgar Allan Poe’s famous detective, Dupin, from “The Murders of the Rue Morgue” to find the murderer.

Whether she’s studying footsteps in the mud or asking sailors about latitude lines, one of the many things that’s charming about Eliza is her eagerness to learn. She’s not afraid to admit she doesn’t know something and to seek out an answer. She’s also refreshingly open-minded, for 1851. When a fellow prostitute introduces herself and says she works at a brothel that serves only women, Eliza merely replies, “Ladies have the funds?” Although friendships between “girls” are discouraged, a lovely kinship builds between the young women, built on mutual admiration—Eliza greatly admires how Jean dresses as a man and moves easily through the town when she chooses to—and attempting to solve the murders.

Both women realize that no one in authority, such as it is in that moment, have any interest in pursuing the case. Perhaps they care too little, Jean and Eliza rationalized, “for girls in our line of work.” It confuses them, though, knowing that the service they offer is valuable, and that they themselves are so few, compared to the men in California. Why are they not treated more carefully? Why is the violent end of women in their community not treated with more alarm? But people seem to expect a certain amount of violence in this nearly lawless land. Even Eliza seems to shrug off the not-infrequent customers that have to be ejected from her room after violent eruptions.

In one cinematic scene, Eliza is eating breakfast when a fight breaks out, as soon as guns are drawn she’s slid out of her chair and under the table. Only Jean’s clientele are blessedly peaceful. “When my ladies come to me, almost all they want is affection, and time and relief from the diary round. Not one of them stares at their lower regions and gets disappointed or angry.” Eliza deals with plenty of customers who stare at their lower regions in disappointment and anger and deflects or overcomes obstacles with grace nightly.

Neither Jean nor Eliza really wish to be a detective like Dupin, but seeing that no one else is searching for clues, the women realize it’s up to them. Unfortunately for Eliza, she suspects nearly every man she meets, so narrowing the field isn’t easy. She’s frightened of what might happen, but she’s also excited. “The odd thing, she thought, was that she was both more afraid and more eager to see what would happen than she had been before she had set out for California. It was as if, for her whole life, she had been dumb and patient, like a milk cow.” Identifying the murder provides a sense of agency to Eliza that’s she’s never experienced before, pulling together her newfound independence, her natural intelligence, her partnership with Jean, and her knowledge garnered from Mr. Poe. She’s a remarkable character who faces the reality of the dangerous business she’s in and bravely walks on.