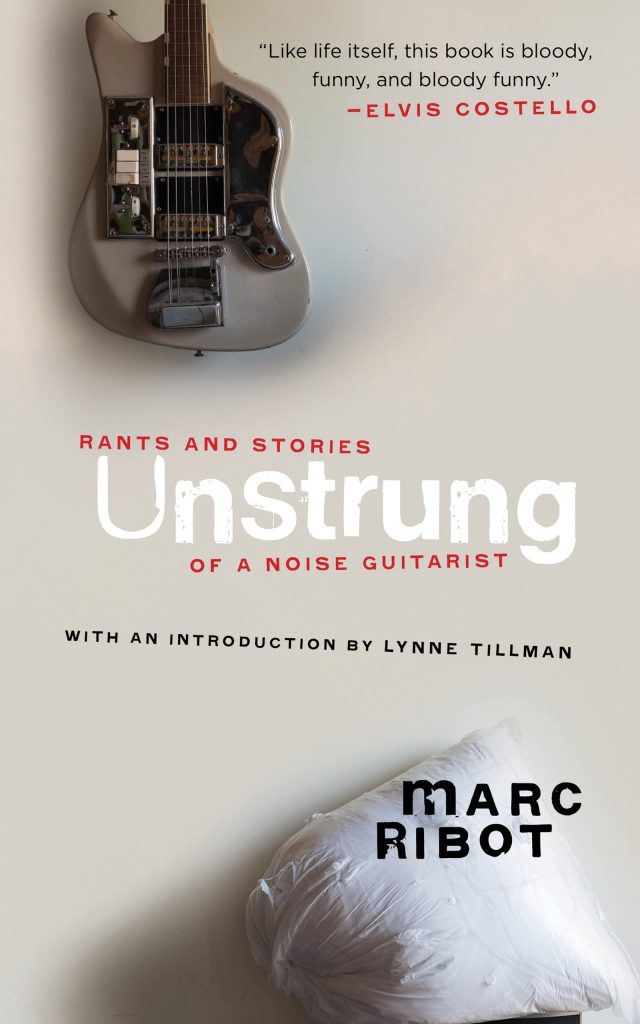 “Unstrung” was written to make your ears bleed. I mean that in the best possible way. It’s not particularly loud, discordant or distorted. Nor does Marc Ribot come close to suggesting one clean the wax from their ears with an ice pick, not a real ice pick, anyway. No, “Unstrung” draws first blood by picking at the scab of sonic complacency. This makes sense in a book written by a musician who identifies himself as a noise guitarist. If you’re already familiar with Ribot, you’ll know what that means. If you aren’t familiar with Ribot, or you’re thinking, “Aren’t all guitarists noise guitarists?,” then check him out online. I know next to nothing about noise music, but after reading “Unstrung,” I can’t imagine Ribot putting himself into that or any other kind of categorical coffin. Creatively juiced by New York City’s downtown music scene in the late 1970s, Ribot has performed or recorded with enough mainstream, jazz, world and boundary-pushing music artists to fill an art-house jukebox. Watch him perform with his band Ceramic Dog or with avant-garde composer John Zorn, and what you hear is that Ribot sees a guitar less as a musical instrument and more like a jackhammer (or sometimes a scalpel, sometimes a spoon) for chiseling sound out of silence. “My relation to the guitar is one of struggle,” he writes in the short essay “Guitars.” It’s a struggle he took up as a kid studying with Haitian American classical guitarist and composer Frantz Casseus. If music is noise wrestled into conformity with culturally conditioned temporal and tonal expectations, Ribot and others working the musical ruins get off on screwing those expectations. It’s one way to force open the gates that keep chaos from grabbing us by the throat. Maybe the spittle produced by such a throttling cleanses the soul.

But Ribot’s riffs on sonic complacency are only part of what “Unstrung” unwinds. Ribot also thrusts at complacent self-regard, corporate greed, death and shitty landlords. His repertoire includes vignettes, memoir, satire, confession and eulogy, all boxed up into four parts. Read his thoughts on the crow of a rooster (you’ll never listen to barnyard animals the same way again), or his one-pager on watching a bicyclist get hit by a car, or the time he was shamed by his fraud of a second-grade teacher for plagiarizing Christina Rossetti. The essays in Part I, most of which have been published elsewhere, include some nice portraits of mentors and fellow travelers, folks like Casseus, of course, but also bassist Henry Grimes, free improvisor Derek Bailey, music producer Hal Willner, and Ivorian musician and griot Emile Yoan. In “Three Stories Involving Black Liquids,” Ribot nicely illustrates the principle that the universe won’t hesitate to throw you a sucker-punch you probably deserve. The best of Ribot’s essays and vignettes are in Part II, and reflect the psychic grapplings of an aging musician who makes his living on the edge. “Putting Your Arms Around a Memory” is a muted panegyric to the ghosts of the Lower East Side, where Ribot outlived the 1990s. “Today I Did Something Remarkable” is a bit of wistful thinking addressed to his now-grown daughter. And that remarkable something? It involved IKEA and an Allen wrench. The satirical pieces in the last two parts of the book read like exercises in improvisational prose. They are entertaining, but if you’re looking for a moral, that’s your problem.

Not all musicians who write books know how to play a sentence. Ribot seems to have that talent. Maybe this is because he feels what he writes rather than writes what he feels. It’s the difference between favoring metonym, which Ribot does, and fetishizing metaphor, which Ribot does not. (An aside: At your next Thanksgiving, debate with your family whether calling someone an asshole is an example of metaphor or metonym.) I doubt Ribot would ever refer to his guitar as a jackhammer or scalpel or spoon. Or axe, for that matter. Really, all Ribot seems to be saying in “Unstrung” is don’t give in to the complacency, conformity, and compliance that will eventually metastasize to your soul.