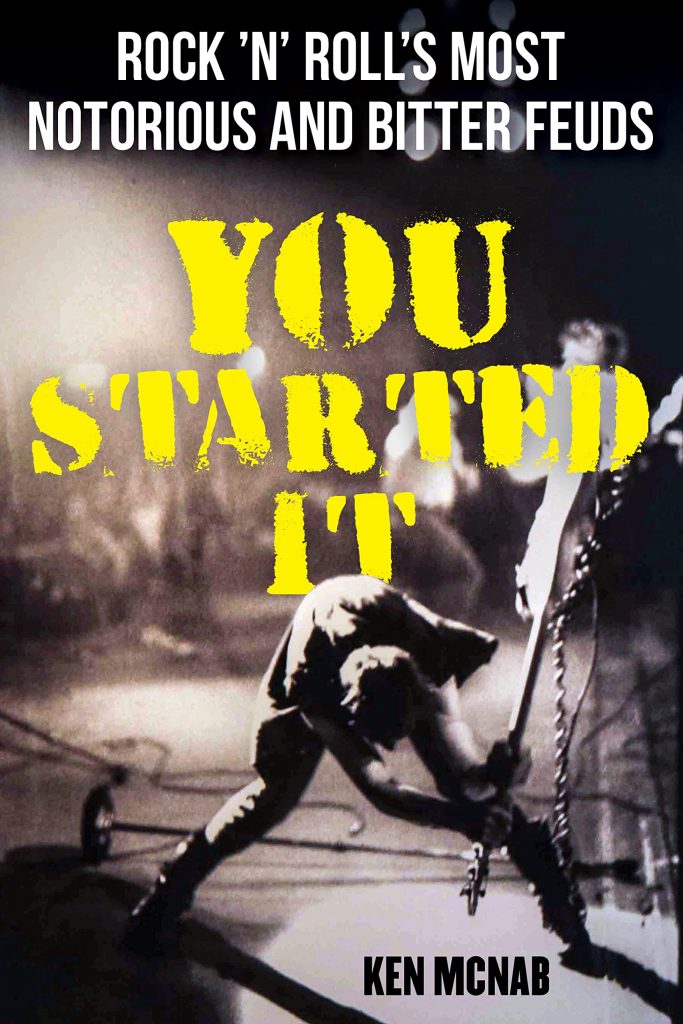 Likely you will not be shocked to learn that even famous rock musicians can be jerks and backstabbers. Nor will it surprise you that highly successful musical groups are often roiled by petty jealousies, selfish ambitions, and acrimony over sex, drugs and musical direction. Not to mention money. Given that you learned all this watching VH1’s “Behind the Music” and countless other documentaries and biopics, why should you read Ken McNab’s “You Started It: Rock ‘n’ Roll’s Most Notorious and Bitter Feuds”? Truthfully, I’m not sure. His book features the standard lineup of dysfunctional musical units: Fleetwood Mac, the Eagles, the Police, Simon and Garfunkel, the Beach Boys, Oasis (now there were a couple of jerks), Guns N’ Roses, the Supremes (the only “girl” group to be included), Pink Floyd. I found little that was fresh in these tales of temper tantrums and tempestuous talent. Axl Rose a prima donna? Do tell. I was least familiar with the feud, to put it mildly, between Tupac Shakur and Biggie Smalls, but I imagine that most fans of these rap artists know well the story of their fallout and subsequent murders.

McNab is a Scottish journalist who, according to the back cover, “is widely recognized as a leading authority on The Beatles.” Unfortunately, his book offers few facts not already gathered. Most of what McNab reports is simply information reported elsewhere, like Rolling Stone or previously published books written by or about the characters and bands. Occasionally McNab taps some of his own informants, but these are usually bit players who watched the shitshows unfold from the wings. McNab is also partial to sentences like this: “And at the core sat Brian Wilson, the gifted young Icarus who touched the sky with his enchanting lyric-visions, then crashed to earth, a burned-out, paranoid, drug-addled husk.” I’m not opposed to mythologizing prose, but this high-flown analogy is representative of McNab’s frequent lapses into dramatic overplay. He seems to recognize that much of what he is writing about isn’t much to write about.

Throughout “You Started It,” McNab rightly avoids trafficking the cliché that friction can spark creative genius, but in doing so, he closes himself off to saying anything revelatory about the complex dynamics that can fracture successful collaborations, or about why we should care in the first place. As a result, investment in his book yields few genuine insights. And surely there are insights to be had when tugging at the schadenfreude that lurks within us all. In the end, there is little that separates “You Started It” from other celebrity exposés, which often mistake nosiness for curiosity. It’s the difference between chatting with Mr. Spock, who found human behavior to be a source of endless fascination, and Mrs. Kravitz, the neighbor on the TV show “Bewitched” who couldn’t mind her own business. Read “You Started It” if you enjoy listening to the argument next door, or if you take delight in knowing that even rockstars can be petulant, unhappy, self-destructive babies. As for me, well, I’ve got my own problems.

“You Started It: Rock ‘n’ Roll’s Most Notorious and Bitter Feuds”
By Ken McNab
Backbeat, 296 pages