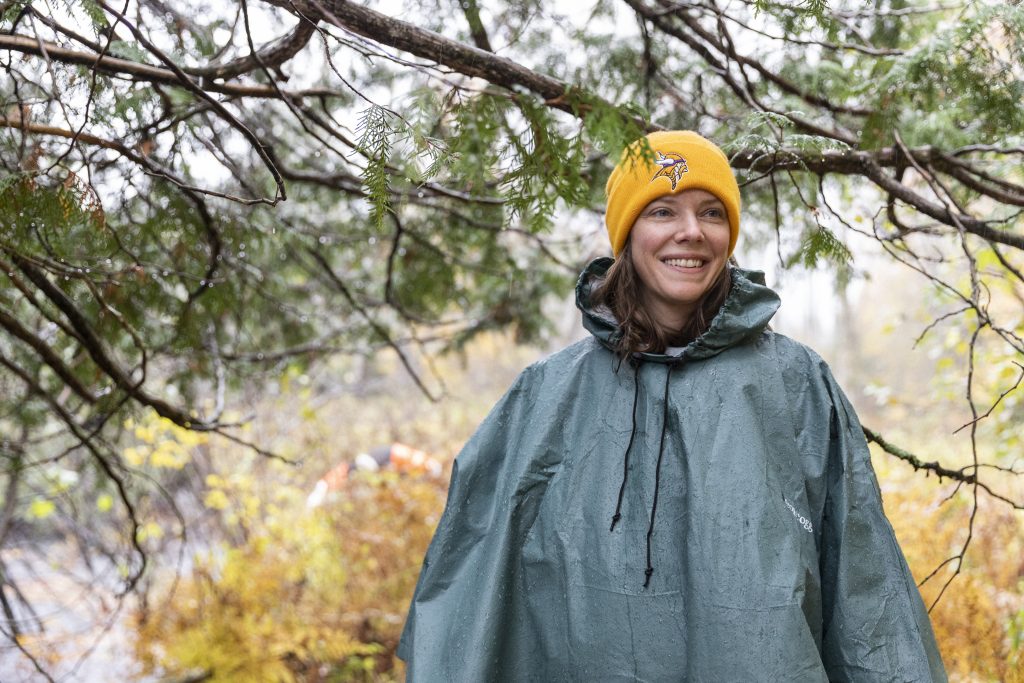 Iliana Regan in the Upper Peninsula of Michigan, in October 2019/Photo: Sara Stathas

Chef and writer Iliana Regan gets scared sometimes. But it doesn’t stop her from tackling what’s difficult, whether it’s opening a restaurant deep in the forest, getting a masters in creative writing, and doing more books after the startling success of her memoir “Burn the Place.”

“I think I’m always pushing myself,” says Regan, in a voice that’s soft yet textured, like the inside of a cattail. “It’s a strange phenomenon. My wife will say, ‘You’re such a pessimist’ and I’ll say, no, I’m really an optimist. She’ll call me a nihilist and I definitely am but I’m as much a nihilist against humanity as I am for it, and as much against myself as I am for myself. Because if I was just a pessimist, I wouldn’t have tried to do all these things I’ve tried to do.” 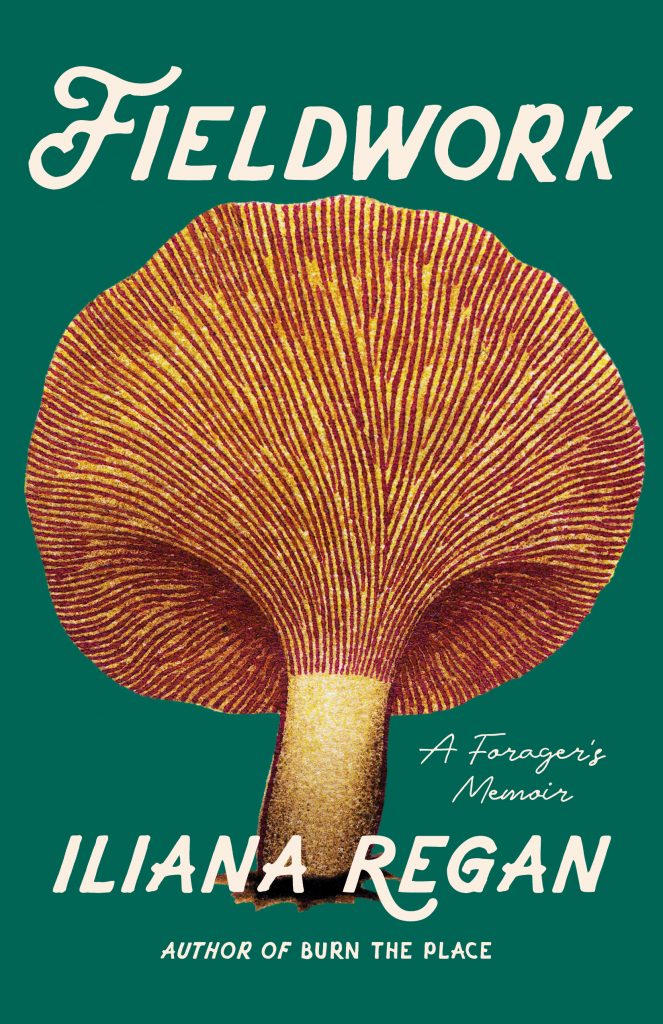 Her new book, “Fieldwork,” tells stories about foraging for food and the challenges of running The Milkweed Inn in Michigan’s Upper Peninsula. Like “Burn the Place,” it weaves tales of cooking and finding ingredients with family stories—her mother canning peaches in a hot kitchen, her father and grandfather cracking walnuts with a station wagon. A poetic, mystical book, “Fieldwork” explores what connects us to others, to nature, and to the past.

Regan, forty-three, grew up on a small farm in Indiana, and knew early which mushrooms were good for food, and when berries and nuts were ripe. She learned cooking from both parents, and in “Fieldwork” connects her mother with the kitchen and her father with the forest. She went on to jobs in various restaurants, including the fine-dining kingdoms of Trio and Alinea, before opening Michelin-starred Elizabeth, named after her deceased sister, and then Kitsune.

Regan’s memoir “Burn the Place” tells of her childhood, her struggles fitting in sexually, and a dangerous drinking problem she fought to overcome. Described by The New York Times as “the definitive Midwest drunken-lesbian food memoir,” the work was long-listed for the National Book Award in 2019.

That year was a time of great change for Regan. Kitsune closed, and Regan and her wife Anna Regan opened Milkweed, which hosts ten guests on weekends April through October for a “new gatherer” culinary experience. In 2020, Regan passed on Elizabeth to longtime collaborator Tim Lacey, who later announced it would close in late 2022.

Asked why she left the Chicago restaurant scene, Regan says that while she loves cooking and creating, management was a headache. “There’s only so much I can do for so long,” she says. She notes that other successful chefs have expanded their businesses, but the path for her was scaling down. “For me, it’s going back to my roots, to growing things,” she says. “That was a long-time goal.”

But Milkweed, located in the Hiawatha National Forest, offered different challenges. Anna and Iliana have two cabins and 270 acres, and they’re an hour and a half from the closest town. “It takes forever to get here,” she says. “We really only go out two times a week to get supplies. Being in isolation, while it’s extremely beautiful and I love it, it’s very complicated.”

Regan says sometimes she thinks, “Damn, now I did this thing, and it’s just as equally hard as what I was doing at the restaurants, only in a different way. There have been people we’ve met along the way who are out there in the wilderness… and they say, ‘Wow, you guys have some balls.’”

The death of her sister created in Regan a nagging worry about other loved ones dying, but also a sense of urgency, and a bit of fearlessness. “There’s plenty of fear, obviously, but at the same time it’s just—there’s a thing I want to do, and I’m going to figure out how to do it,” she says.

Regan wanted to pursue her masters at the School of the Art Institute back in 2019, but got too busy. So she deferred it, and when the pandemic hit, decided now was the time. Attending partly on Zoom from Michigan, and partly in-person in Chicago, she graduated last May.

“I got that masters with the idea that five years from now, maybe what I’m going to be doing is trying to have a teaching job full-time, and then just doing Milkweed in the summer,” Regan says.

Some of the differences between “Fieldwork” and “Burn the Place” may be due to school, Regan says. “I won’t say I was workshopping it a ton, but I was in writing school, so I was focused a lot more on story and story structure and just the technicality of writing, as opposed to ‘Burn the Place’ where I was focusing on restaurants and the writing was secondary. So it kind of flipped.”

Another difference is that she wrote “Fieldwork” entirely outside, in every weather. “I was completely immersed in the environment and I thought, okay, this is like foraging, and the book is about how the forest functions, but it’s also about how life functions and DNA works, not only the DNA of the forest but the DNA of ourselves. I was thinking of things almost symbolically, like how the mycelium networks are, and how the trees respond to one another, and then our universe and also our bloodlines and all that kind of stuff… It’s kind of like I’m writing over a piece of tracing paper, and on the back side of the tracing paper are these themes and symbols, and the writing is on top of it.”

For Regan, writing and cooking are interchangeable creative outlets. She takes the ingredients at hand—whether it’s chanterelles or a childhood memory—and tries to figure out how to tell the story, how to plate it.

She has to trust her intuition—when she doesn’t, “I end up losing my voice and sounding like somebody else, or I get off track.”

Regan was always an avid reader and writer—she got her undergraduate degree in creative writing from Columbia College. Her influences include Toni Morrison, Ernest Hemingway, Jeffrey Eugenides, and the diaries of Virginia Woolf and John Steinbeck. She learned Steinbeck wanted “The Grapes of Wrath” to sound like a tractor. “Then I read ‘Grapes of Wrath’ and I see this structure a bit, this chugging and churning and clanking, and the tractor exhaust.”

Regan says that while teachers and writing workshops can help, most of what she knows about writing comes from reading—“first reading the book and seeing exactly what they’re doing and then going back and reading for just the story. Usually, I’ll read books two or three times.”

Both of her books were put out by Evanston-based Agate Publishing, led by Doug Siebold. The cookbook is next, but it won’t be a Milkweed recipe book—those aren’t the sort of dishes you just do on a Saturday afternoon. Instead, it will be a story-telling cookbook, set in Gary, Indiana in the 1970s, with recipes from her father, including dishes from Jenny’s Café, her grandmother’s Polish restaurant. “A lot of recipes he had from Busia, and from people he knew at the steel mills, from the waitresses who worked at Jenny’s. It’s all these Eastern European recipes, some Korean ones, some Japanese ones, some Greek ones.”

Regan doesn’t tend to use recipes when she cooks, though she does follow them for baking, which needs to be more exact. She doesn’t think people are afraid of foraging, or of cooking in an improvisational way.

“I think people are getting less fearful around food. With social media… people have become more and more curious about food, which has led to more traditional techniques like foraging and preserving and homesteading.”

Even in small cities, Regan sees a market for more unusual, artistic and locally sourced food.

“Sometimes people lump foraging and fermenting into something that’s trendy, but it’s not. It’s just an old way of cooking.”

Regan says she’s asked if it’s strange that people come to Milkweed and feel like they already know her from reading her book. But they don’t know it all. “It’s such a small window into so many other things. I’m sure I’ve told a lot, but it’s not everything,” Regan says. “On the one hand, I feel like there’s nothing more I can say, on the other hand, I feel it’s only the tip of the iceberg. I don’t know. I guess I’ll just keep writing.”