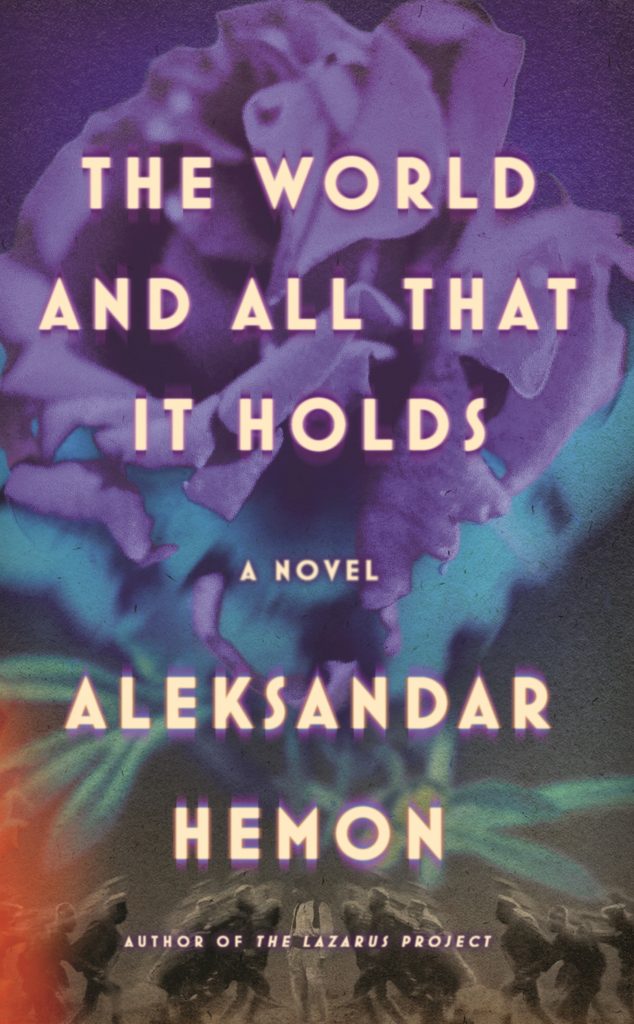 Award-winning author Aleksandar Hemon’s new novel “The World and All That It Holds” is a masterfully written epic tale of two soldiers from Sarajevo who fall in love during World War I: one Jewish, the other Muslim. The war upends their worlds and “like all refugees, they [keep] moving forward because they [have] nowhere else to go; being on the move [means] being alive.” Along the way, a daughter is born to them.

This is a tale of impossible love, the madness of war, and the trauma of displacement. It’s about the mutability of people and place, but also the permanent space one can occupy in another’s heart. I recently spoke with Sasha about “The World and All That It Holds.” 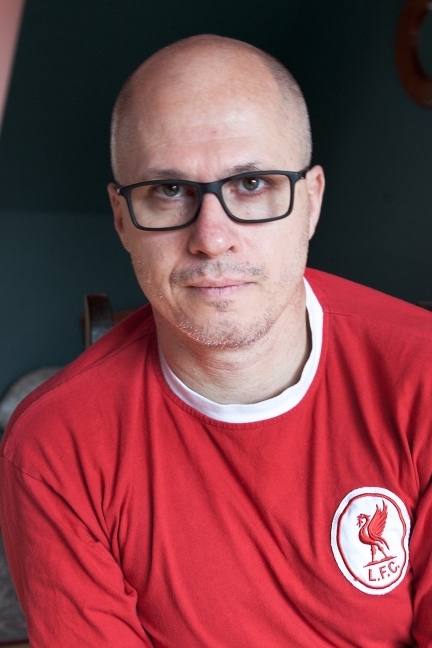 What is your attraction to the spy story?

I had an interest in World War II history and spies when I was eleven. But the fascination grew in the early nineties, when I ended up [in Chicago]. I was experiencing a breakup of the monolithic self. I was like, “Who am I really?” I realized the metaphor of spies, the situation spies are in—this kind of complex layered false and true identity. I like that and still do because of the way we are. We are the main character in the story of our life, and we claim our story is absolutely true, but it’s always edited, if not entirely, false.

What was your process for writing this book?

At what point did you decide that the two soldiers would be lovers, that Rahela would be their daughter?

Sometime after 2010, after my daughter died; I can’t even claim it was causally related. At some point I realized that if [the soldiers] are just friends and want to get back to Sarajevo, then the emotional content would be mainly nostalgic, remembering the city. Eventually, their nostalgic vision of Sarajevo would become like a theme park, flat. I thought—I think I thought, I can’t remember the moment I formulated this to myself—If they were lovers, then the emotional energy would come from their relationship and Sarajevo. Home would be transferred to them, not place, but by way of a feeling. They would be home for each other. Then out of that love a child could arise (though, not biologically).

There’s a thread throughout the novel about the safe insignificance of being a nobody nowhere.

Aristotle says “History is what happened, and poetry what might.” History, traditionally, is about “great” people. Someone will be writing, or has written already a biography of Putin, but what about the hundreds of thousands of people who die, and hundreds of millions of people who are affected by those deaths of nothings and nobodies? History doesn’t care about them. I detest the genre of novels or biographies that are about “great” men or “great” women. I think that what literature can do is tell stories about, or imagine the lives of so-called nothings and nobodies. These are my people. These are people I want to write about. Nothingness and nobody-ness is compounded in the situation with displacement and migration.

This book seems more visceral than your others, more attention paid to the fragility and vulnerability of the body. What do you think is the reason for that?

I think the narrative necessitates focus on the body, because at no point, except in the first chapter and at the very end, do any of the characters exist in what we would call a stable society, nation-state, or some kind of predictable social order with authority, laws or institutions. It’s the body in history, and history destroyed everything but the body for these people.

In my world and my system of belief, a consciousness has to be inside the body. It’s not separate. It is there. I may have a brilliant idea, but I have to have a shower because I stink. I can’t imagine how one can live and have ideas without always being aware of their body. Love, attraction or desire intensifies all that. What love can do is allow for this merging of feeling and thought.

How should one think about fact and fiction in this novel? I remember you saying once that in Sarajevo, there’s not a great distinction between fiction or nonfiction; there’s story.

There’s no nonfiction in the book. World War I happened. The wars in Shanghai happened. The POW camps in Tashkent happened. So what is the threshold in terms of the amount and value of facts, of what’s true or untrue? What is important is the way we perceive it. Even if I said, “this is nonfiction” within the first paragraph, the reader realizes it’s fiction because it is narrated as fiction, not as nonfiction.

Because my other books, my people live in history and histories, that at least allows for the possibility of facts, right? So some things did happen. Even if we didn’t know they were happening when they were happening; we find out that history can build a shared reality retroactively.

I write stories, novels or short stories, and I build them from elements that can be made up entirely in my mind workshop, or I can pick them up from a historical book of nonfiction as I did [with this book]. What I like to do is acknowledge this work of building and constructing, that this [work] is imaginative artifice, propositional.

Music is such a huge part of who you are. I’m curious if it had any impact on your writing.

I listen to music whenever I write, and I make music, but there’s a more direct connection between music and the book. [The soldiers/lovers] sing songs to each other, Bosnian and Sephardic songs. Midway through writing the book, I contacted a friend, Damir Imamovic, who is a singer and performer of traditional Bosnian music called Sevdah, which is ideologically similar to the blues or fado. He is also one of the few openly gay men in Sarajevo. I love his music, I love him, we’re good friends. I asked him to record songs that he thought [the soldiers/lovers] would sing to each other. I kept sending him chapters I wrote, and he’d work on songs. His album title is the same as the book, but it’s autonomous; you can listen to it without having read the book. The Smithsonian Folkways will release the album in May, with a single coming earlier called “Osman,” about Osman from the book, and it’s most beautiful. One of the songs that he wrote or chose to perform, I anachronistically inserted into the book and connected other things in the book with the song. His music and my book are integrated at this level.

Any thoughts about adapting the book to a film?

I don’t think anyone would do that, because it’d be extremely expensive, with all the costumes and stuff. Even so, I’m not going to rewrite my book as a script. If someone is interested in developing it, and they ask me to do this, I will decide based on the situation at the moment. But I’m not gunning for it. This is the final product, as far as I’m concerned. I love film. I’m a film buff and fanatic, in fact. But I don’t want to write a book that is just a step toward the visual representation. I want it to end in language.

Do you have any favorite quest stories or epic novels?

I like the foundational epic. I like “The Epic of Gilgamesh” and “The Odyssey.” But I have this whole theory of migration, narration, and the epic structure which developed while I was working on this book. I think migration necessitates narration biologically, that humans develop language and there’s no language without some kind of narrative instinct or need to construct or reconstruct experiences as narratives; it’s inscribed in language. No one just learns words. Everyone learns stories about things for which they need.

This is my theory. I’ve not studied it or asked anyone who actually knows anything. But if people are hunting for buffalo, five people go, three come back, people ask, “what happened there?” “There was a buffalo there and it killed Grunty.” The experience has to be a digested process and transmittable by way of language. We’re past that grunting and pointing level of language, which chimpanzees can do. Human development, everything we have done as a species is related to language and narration, and the fact that we can move in space. So if you extrapolate that, the first, foundational narratives in human civilization were all narratives of migration and death. In “The Epic of Gilgamesh,” Enkidu is born outside of the city, then he goes into the city because Gilgamesh needs a friend, then they go to the underworld, and come back. There’s a beast, and they come back. In “The Odyssey,” Homer circles the fringes of the known world, comes back, tells those stories to people who have never been there, never seen a Cyclops. This is both for storing knowledge, but also expanding knowledge by the way of imagination. If you are capable of constructing a hypothetical narrative—the “what ifs,” not just reporting—then you think, “Whoa! What is then beyond that line?” We could assume there were no Cyclops or that Homer or someone else made that up. But it allowed them to imagine the things on the other side of this physical world. And so the basic narrative structure through history, regardless of the culture, are these epic myths where heroes go somewhere else that then evolved into foundational epic narratives of empires like “Aeneid” or parodies like “Don Quixote.” These epic narratives require a movement through space. All of them require that character to be here and then somewhere else. So my formula is, narration is migration squared.

When I was conceiving the book, the characters were always going to not settle anywhere for long—always long for the return in various ways to various degrees, and that to me necessitates that there’s no other way to engage with this experience except this way.

Did you feel more rooted in this book than in previous work? For me, reading the first chapter invoked “The Accordion” from “The Question of Bruno.” It felt like a return, to a narrative, a history, a story.

There was a point when I was writing four books at the same time, including this one. If one does that as I did and do, it means you can sort out your interests. Millions of things interest me simultaneously, so if I were only working on one thing at a time, one could imagine the potential danger of cramming everything into it, then having to take it out. I was writing “Love and Obstacles” and “Lazarus Project” at the same time, which is why Brik has no parents. In a sense, they complement each other. They were existing, and evolving in my mind and computer at the same time. They’re not mutually exclusive. Because books are published sequentially, everyone thinks there’s some kind of planned evolution, but it’s really a mess.

“The World and All That It Holds”
By Aleksandar Hemon
MCD/Farrar, Straus and Giroux