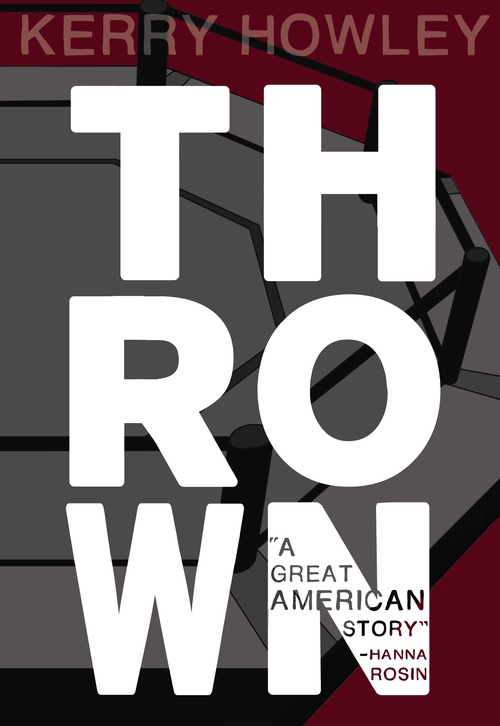 Disclaimer: I’m not a fan of fighting. My teen son was a wrestler and endured his share of cauliflower ear, knee injuries, concussion and all-or-nothing coaches. My husband made a documentary about head injuries in sport, so I tend to be squeamish and protective of the human body. I therefore approached “Thrown” with caution.

It’s a layered, complex work about MMA fighters, their ambitions, obsessions and myth-making. Out of sweaty training basements and small-town fighting cages in the Midwest, we meet fighters Erik and Sean. Why do they fight? We are asked to weigh their world of “ecstatic experience” against the alternative offered by the healthy-minded, with their pre-natal yoga and gluten-free diets, “their dull if long lives of quietist self-preserving conformism.” By the end of the book, I’m in with the fighters.

Howley looks through the lens of a “spacetaker,” a kind of groupie for fighters. One moment we are alongside the cage with a favorite fighter, contemplating the nature of violence. The next, we consider the ambiguities of home: “No person ought to return to the place from which she sprung, unless she wants to risk being stuck in time. What happens when you go home?” She weaves in fighting history, critique of martial arts movies, humor, philosophy and vivid writing of the body.

I was compelled to watch YouTube videos of MMA fighters so I could see for myself her Nietzsche analogy: “order vies with chaos at the point where the orders of beauty collapse.” She describes Erik’s “lissome porcelain limbs, bloodless grace … clean white arms sweeping back and forth, slim muscle making itself visible in flashes, long torso turning with every sweep and snapping back so quickly the flicker of an eye is not fast enough to follow.” Howley also exposes the pipes and wiring of writing when she describes how difficult it is to write the body, to capture energy in motion.

The most disturbing passages are those concerning a concussion. They thread through several chapters, so the reader senses Erik’s gradual realization of his injury, “a man terrified by the sticky slow way his thoughts seemed.”  One bum note was the strange idea that older fighters are impervious to injury, tissue not prone to shearing, “their neurons are not given to disruption when slammed against their skulls.” Maybe they think they are impervious, but clearly they are not.

The men are revealed to be courageous, vulnerable, absurd, loving and sweet. A mesmerizing passage has Sean leaning over a baby who may or may not be his child. We see a hardened fighter with beaten face and hands, gazing at the baby who focuses on his own tiny, perfect, undamaged toes. It’s an intimate scene, full of tenderness and wonder.

Howley peppers the book with sharp details, for example the wrestler eating two eggs before a match. “The rationed man is all precision,” she writes before describing how Erik hollows out the yolk and eats the whites. By then, his frame had “catered into a landscape of shadows and white skin stretched tight over bone.”

One small irritant was Howley’s gripe with her former philosophy professors. It came across as peevish, but then again, it’s a book of literary nonfiction. It’s as much about the writer and the fiction of narration, as it is about the ostensible subject of MMA. The narrator is at once unreliable and a wonderful observer, “a pair of eyes, a body diminished into the pure act of perceiving.”  Whether we are fighters or writers, “the self is always the thing you are fleeing.” (Toni Nealie)