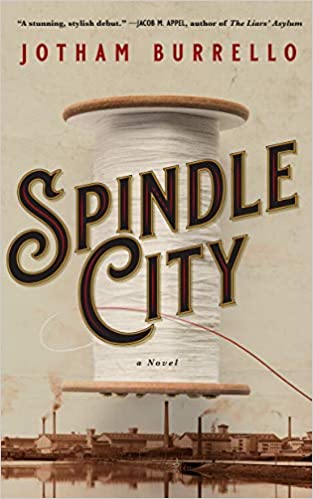 Fall River, Massachusetts, in the first decades of the twentieth century when the novel is set, was a mill town. Mills dominated life in Fall River—generations of hopes and dreams were stitched to the success of the businesses and their patriarchal owners. A small mill owner whose sympathies lie at least in part with the population that makes Fall River run, Bartlett is uncomfortable with his own moral compass. Secrets of his role in a deadly fire and the existence of an illegitimate child, as well as his cover-up of son Hollister’s sexual assault, battery and blackmail of a Portuguese employee, are buried, but in shallow graves. Marketplace realities temper his instinct to support strong worker coalitions and their efforts to command just terms.

“Spindle City” is about yearning, but aspirations in this setting must necessarily pass through unholy gatekeepers. Justice is not a question of right and wrong, but power. The mill owners have it. The workers do not. Self-interest dictates terms and creates an environment in which doing the right thing might very well doom the prosperous as well as the working poor. Southern titans of the industry, with their absolute commitment to non-unionized work places, wait to pounce.

But Bartlett serves mostly as the sun around which an ensemble of characters orbits. His children, extended family, his maid, his employees and business partners, all seek their own way in a world often unreceptive to their dreams. Sarah Strong, leader of a workers’ rebellion movement, persuades Bartlett to tour the town’s most impoverished neighborhood. Helen leads a progressive and often reckless lifestyle while aggressively courting Bartlett’s shy son Will. Maria overrules her husband’s desire for revenge in offering a kind of forgiveness to her attacker.

We join the town at a precarious moment in the industry’s life, when sunny surface conditions obscure underlying darkness. The novel’s kaleidoscopic opening, a June day in 1911 amidst the town’s riotous Cotton Centennial festival, sets into motion a breathless array of characters and plotlines while establishing the colorful historical setting. In the dense crowd, laborers, anarchists, mill managers, union organizers, society ladies, servants, peasants, prostitutes and immigrants—representatives from the hoity Highlands down to the decrepit Cogsworth slums—jockey to see President William Howard Taft deliver his remarks. The form of the opening mirrors the opening of Don DeLillo’s “Underworld” (1997; also published as the novella “Pafko at the Wall”) in which a baseball game and its announcer frame the complicated, intertwined pieces of the author’s elaborate puzzle of the American century.

In fact, Bartlett possesses a well of compassion, even empathy, but is paralyzed at the prospect of change, or even uncertainty. The female characters make sure that he confronts these tough moments. “Joseph stopped and took out his handkerchief and patted down his neck and brow. He’d hit a trifecta of crazy: Evelyn, Hannah, and now this Sarah character. But the first two were benign. This one could exile him from every decent circle in town, even the few he actually enjoyed.”

Burrello is a literary renaissance man—he has written two books on writing craft, started and runs a small publishing company, directs literary festivals and prestigious workshops, and has taught college courses for the past two decades. That training shows up over and over in “Spindle City,” like in the sentence, “There was so much of this business Stanton had never stopped to understand, and Joseph couldn’t help but admire the man’s total lack of concern for anyone but himself.” Each line is sculpted with descriptive pieces, like those of hands and clothes, working to place characters in context. The result is an historical setting in which the underlying sentiments, firmly on the side of the oppressed classes, gain plausibility, and the story lines originality.

This well-crafted historical novel also succeeds in balancing big ideas about social justice, particularly regarding class, with tight plotting. Bartlett is holding his life together with a proverbial needle and thread, and since his fate is tied to the fate of the common people, and their fate is tied to the fate of the whole town, the tension in “Spindle City” grows exponentially. It is a nuanced portrait of both the ruling and working classes in a highly interesting time and place in American history.