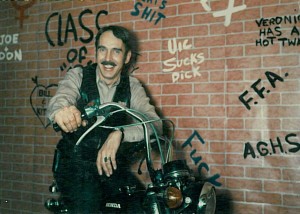 If Hugh Hefner were a leather daddy, he would be Chuck Renslow. Both men were born in Chicago in the 1920s, lived in mansions, cultivated harems and, importantly, each trail-blazed a sexual revolution on a massive scale. “Leatherman: The Legend of Chuck Renslow” is a new comprehensive biography by Tracy Baim and Owen Keehnen that invites the Hefner-Renslow analogy but doesn’t stress it, for Renslow’s contributions and pet projects have been so varied and so unique. “Leatherman” explains in detail how Renslow hand-forged a safe place for his brotherhood of BDSM practitioners to play and, along the way, legitimized and improved the conditions of this subculture within a subculture. 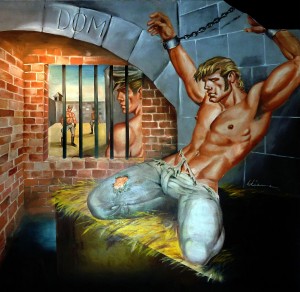 Renslow had many entrepreneurial pursuits, from his early photo publication to later publishing GayLife, a seminal gay-focused newspaper, to running gay-themed businesses such as a gym, a bathhouse and Gold Coast bar (described by one participant as “ultrafamous,” as it was one of the earliest gay leather bars, one of the most enduring and one of the most salacious), the annual International Mr. Leather (IML) competition, running for thirty-two years, and founding the Leather Archives and Museum, to preserve the legacy of the culture. The biography does an excellent job of tracing the development and sometimes downfall of these enterprises through first-hand narratives and long-form quotes from Renslow and his “family.” Along the way, the authors flesh out Chicago’s evolving attitudes toward gay BDSM culture and the transient landscape of Chicago’s gay community, giving a history of how gay bars and cruising spots moved from River North—then a collection of warehouses and alleys—to Boystown and the far North Side—often moving because Renslow led the way. 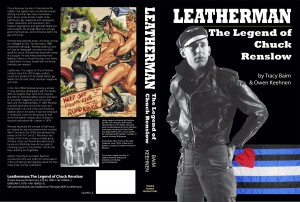 “Leatherman” is an in-depth compendium to some of the more generic Pride events and general cultural-sexual histories (for instance, “Out in Chicago” at the Chicago History Museum). To this end, the book also provides unexpected and welcome intersections for readers with interests beyond leather sex. The book’s co-author is Tracy Baim, who is also the co-founder and publisher of Windy City Times, so it’s fitting that she provides insights into local journalism and publication projects. There is a sidebar about Mayor Harold Washington, a record about how both the mafia and the police ran small businesses, and tons of details about how the leather subculture identifies itself visually, from patches and hankies to flags and dress codes. The leather subculture is not only defined by its sexual preferences but also by its alignment with hypermasculine attire and attitudes. Sailors, soldiers, motorcycle gangs, prisoners, rebels, denim, tattoos and muscles are heroicized. The leading artist of the leather mural genre in Chicago was Etienne, Renslow’s life partner, who called his art “jack-off pictures,” as they’re gorged with testosterone, but, in total, these artifacts, most of which can be viewed in Rogers Park at the Leather Archives and Museum, and with many reproduced in the book, relate how this man’s movement succeeded by branding itself. Leather and rope bind this brotherhood, and Renslow ties the knot.