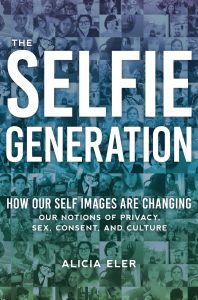 “Man should not be able to see his own face,” Fernando Pessoa wrote in 1915. In nature, he wrote, a person only sees their reflection by debasing themselves, stooping low to glimpse it in lakes or ponds. “The creator of the mirror,” he says, “poisoned the human soul.”

Humanity has often viewed self-regard in low regard. The very word “narcissism” references a myth about a man infatuated with his own water-reflected image. So it may be inevitable that critics see selfie culture as an apotheosis of narcissism. One can think o a Russian nesting doll wrapped around the self—hollow, but indicating the shape of what’s inside. If so, Alicia Eler’s detailed and comprehensive “The Selfie Generation” is another layer of matryoshka—contemplation of the contemplation of the self. (And this review’s another layer still—in which case you, dear reader, are the outermost.)

Eler grew up in Skokie and has written for the Chicago Tribune, Newcity and the Chicago Sun-Times as well as the Guardian and Artforum. She is a cultural critic for the Minneapolis Star Tribune, and a self-professed selfie lover. Her fascinating, thought-provoking book is a grand tour of a cultural phenomenon. She presents the selfie as a way for disempowered people to control self-image and an anarchic antidote to structures of sexuality and money and power. Eler compellingly posits that this seemingly self-absorbed act can build bonds, allowing us to share love, or connect with others struggling with body image or health issues.

Yet she seems eager to dismiss the questions she raises. Can people protest the structures of capitalism using online communities that were created for profit? Can people find self-worth by commodifying their image, seeing it quantified as likes and shares? She’s aware of the downside of the self-stare—one intriguing topic is Project YOLOCAUST, wherein an artist appropriated inappropriately cheerful selfies taken at Berlin’s Holocaust Memorial, photoshopping in pictures of Nazi atrocities to amplify the obliviousness of the self-portraitists. It often feels as if Eler is arranging mirror and camera to see our selfies in their best light. Perhaps selfie culture isn’t a mirror, but an inside-out mirror ball, showing darker or lighter sides of ourselves, depending on where we look. (Jerry Brennan)

“The Selfie Generation: How Our Self-Images Are Changing Our Notions of Privacy, Sex, Consent, and Culture”
By Alicia Eler
Skyhorse Publishing, 315 pages, $24.99